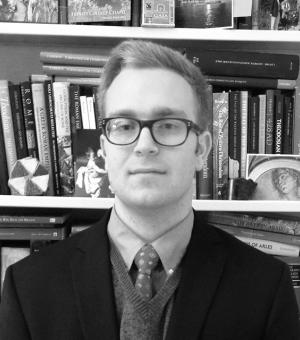 During my time at Oxford I completed two required research projects for my degree: one on political corruption and ecclesiastical politics in the fifth-century eastern Mediterranean, and the other on the trans-Eurasian silk and luxury-goods trade in late antiquity and the early medieval period. In addition to researching and writing for these projects, I spent my year in Oxford taking two papers in Syriac language and literature, as well as coursework on classical Armenian and early Armenian literature, late antique and Byzantine architecture and archaeology, and late antique history and religion.

I was very privileged to be a member of the Ertegun community; Mrs. Ertegun’s generosity both made possible my time in Oxford and gave me an atmosphere of scholarly camaraderie within which my work was a delight.

“Bloody Iuvenalia: Hypatia, Pulcheria Augusta, and the Beginnings of Cyril of Alexandria’s Episcopate,” in Dawn LaValle and Alex Petkas, eds., The Context and Legacy of Hypatia of Alexandria (Mohr Siebeck, forthcoming 2019)

“‘Furnish Whatever Is Lacking to Their Avarice’: The Payment Programme of Cyril of Alexandria,” in Nicholas S.M. Matheou, Theofili Kampianaki, and Lorenzo M. Bondioli, eds., From Constantinople to the Frontier: The City and the Cities (Brill, 2016)

Since leaving Oxford in 2014 I have been pursuing a Ph.D. in History at Princeton University. I expect to complete my work there in late 2019 or early 2020, after which I plan to continue pursuing an academic career. My doctoral dissertation takes a microhistorical approach to the life of John of Ephesus (c. 507–88), a Syriac-speaking bishop, religious dissident, hagiographer and historiographer in the Byzantine Empire of Justinian I, with a view towards contributing to the history of late antique society and mentalité. Alongside this work I am preparing a new translation of John’s Ecclesiastical History, which I hope to publish with an introduction and commentary.

I am very happy to be contacted by past, current and potential Ertegun Scholars.