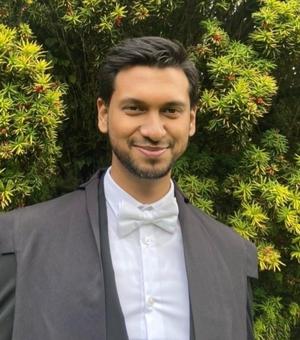 MSt in World Literatures in English

I have stood outside the Censor Board Office with bated breath, as bureaucrats wrangled over whether my film was unpalatable to the incumbent government’s majoritarian nationalism. I have often been politely persuaded to make my political cartoons less “explosive,” in case the police come knocking. My nine-year-old self watched in unmitigated horror as school buses were set afire by frenzied fundamentalists protesting against Taslima’s “heretical” novel. My profound love for the humanities, and my encounters with cultural regulation as actor/directorial assistant of films embroiled in controversies, drove me to study censorship in the MSt in World Literatures at Oxford – a door unlocked and opened wide by the Ertegun Scholarship Programme.

After five years of playing truant, and being anywhere but in the classroom, I graduated with a BA+MA in English (10.00 CGPA) as a gold medallist – the Best All-Round Graduate of Jadavpur University – for my academic performances and my contribution to Indian cinema. Apart from presenting academic papers such as “Resizing the Urban Circus” (on dwarf actors and visual representations of disability) for the NeMLA Conference 2021 in Indianapolis, I have hoped to address marginalisation and the propensity to silence, through my films as well. My second venture as lead actor, An Angel’s Kiss, which depicts Islamophobia, casteism, and disability, became the only South Asian film to compete at the prestigious Academy Awards (Oscars) qualified Heartland International Film Festival 2020, RapidLion International Film Festival 2021 (South Africa), and Cardiff International Film Festival 2021. These life-changing experiences made me believe that the arts travel adamantly, unhindered across borders.

Always intrigued by, and in constant confrontation with questionable censorship mechanisms, I plan to study banned novels and queer films in the Indian subcontinent, post 1988, for my Master’s dissertation. My specific interest is in the often-overlooked role of non-state actors/phenomena in the censorship of narratives silenced for being “blasphemous” or “obscene”. At St. Hugh’s College, with the guidance of Peter McDonald, an authority on apartheid-era censorship, I shall be looking at archival evidence of proscriptions initiated and triggered by non-juridical entities such as extremist organisations or even mobs, who paradoxically are the most decisive, yet the worst readers of literature. I will also assess the variable impact of evolving communication methods, which have led to bans – ranging from fatwas, fax machines and book burnings, to hate tweets and IT mobilisation.

As a part of the Ertegun family, which steadfastly encourages the arts as well, I sustain my ambition to craft insightful films and documentaries as sites of social revaluation, to conduct interdisciplinary research, and embark on unscripted journeys to unpack, un-censor and unfetter my thoughts and those of others.