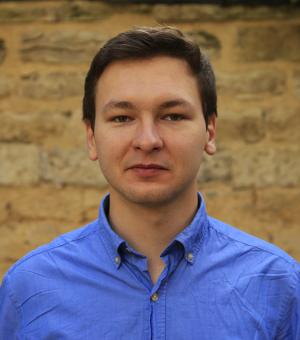 I graduated from the University of Cambridge with a BA Hons. in Modern and Medieval Languages (German and Russian) in 2016, for which I wrote a BA dissertation entitled “More than Contact: Case Studies from the Influence of German on the Development of West Slavonic Languages” under the guidance of Dr Sheila Watts. I received a distinction in both parts of the Tripos and was awarded the Corpus Christi College Foundation Scholarship, the Kurt Hahn Prize for German, the Anthony Dorrell Prize for Russian, the Bene’t Corpus Prize, as well as the Whalley Prize for Ancient Languages and the Corpus Christi College Boorman Prize.

In my undergraduate studies, I focused mostly on philology and the history of the Germanic and Slavonic languages, occupying myself primarily with Old Church Slavonic, Old Russian, Old High German, and Gothic, with some phonetics on the side.

As part of my studies for the MPhil here at Oxford, I would like to examine at least some of the abovementioned languages and the development of modern languages from them. I intend to do this with an approach that focuses on phonetic reconstruction and which will tie in with ongoing scholarship on the ways in which sound change is motivated by the phonetic reality of speech production. I am also taking up Greek and hoping to extend my knowledge of Indo-European philology.

Apart from thinking about sounds in long-dead languages, I enjoy travelling, spending time in nature and baking. I am an avid reader of science fiction and fantasy and am always looking for new languages to learn and people to practice them with. This is but one of the myriad of ways in which I am certain that being part of the Ertegun community is going to be a boon in both my personal and my academic development, and I am incredibly grateful and honoured to have been given the opportunity to become a member of this vibrant community of scholars.