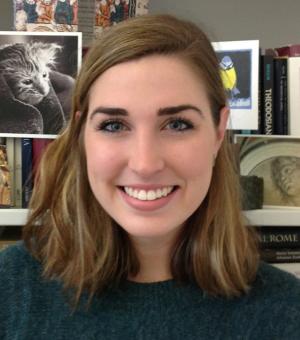 In May 2015 I graduated from Duke University with degrees in Visual Art and Art History, Italian and European Studies, and Classical Civilizations. I am currently pursuing a Master of Studies in Classical Archaeology. I devoted most of my four undergraduate years to studying 6th century BCE Greek figured vases. In particular, I study the intricacies of iconographic interpretation, particular as it relates to trade and cultural exchange. Since discovering a set of “twin” vases during my freshman year in college, my research has focused on the vase trade between Athens, Greece and the ancient city of Vulci in Etruria (what is now modern day Tuscany)—and, most importantly, how these different cultural contexts affected the creation of particular imagery.

While I uphold the traditional roots of vase scholarship, I am interested in extending my experience with alternative visualization methodologies. As co-principal investigator of Duke’s digital humanities lab, I witnessed the strength of uniting technical sciences and humanities. Through 3D modeling and the use of networking software, I investigated the expansion of research questions through visual mediums. These digital modes of interaction explode our conceptions of ancient objects as static representations of a stable past.

Though focused in vase scholarship, I am interested in these larger implications of cultural exchange. While I study the cult of Dionysos through vase iconography, I am also very interested in an ancient past that has been filtered through the philosophies of later centuries. In particular, I am fascinated by Nietzschean theories of the Dionysian and Apollonian that were later appropriated so distinctly by European artistic movements in the 20th century.

There is no doubt that I have driven by my love for art historical research; however, my passion also lies in visual practice, as I initially began my undergraduate career focused only on drawing and continue painting, drawing, and print-making today. Additionally, after spending some time in New York a few years ago, I found the niched world of street art and graffiti. After working on a documentary about these urban artists, I fell in love with deinstitutionalized art.

The Beazley Archive’s online database has served me for four years as the most important source for information on ancient vases. It is the only resource of its kind in the world, housed in Oxford’s Ioannou Centre. The on-site collection provides connections through imagery, attribution, and provenance. After spending so much time devoted to figured vase painting, I am so excited to finally have the opportunity to spend time with the archive in person! However, I am trying to use this year at Oxford to really explore periods and disciplines with which I am less familiar—before settling down into a longer doctoral program. I am constantly driven by the relationship between art history and other fields of study and cannot wait to learn from the other scholars I will meet through the Ertegun house. I am beyond grateful for this opportunity and happy to be surrounded by others who appreciate the humanities as much as I do!

After my time at the Ertegun house, I moved to New York to begin a PhD in Art History and Archaeology at the Institute of Fine Arts, NYU—where I am now in my third year. At the IFA, I have continued my research on Greek pottery and have furthered my work in the digital humanities. Over the past year I have been working on a project that uses the Python programming language as a tool for the analysis of Greek trademarks. I am also currently working on a project involving the intersections of Greek pottery and funerary sculpture. This summer, I excavated at Selinunte in Sicily, and had the great opportunity to study the site's collection of Corinthian pottery with Cornelius Neeft. Since finishing my coursework at the IFA, I am currently preparing for my doctoral qualifying exams as a Visiting Scholar at Duke University. I have continued my practice as a visual artist, and I am happy to be back in the painting studio at Duke this year.

I am continuously grateful for the Ertegun community, and for the opportunities that Mica and Ahmet’s generosity has afforded me. My time at Oxford was incredibly formative, as I was inspired everyday by my conversations with fellow Ertegun scholars. I would be more than happy to speak with anyone interested in my experience at the Ertegun House.