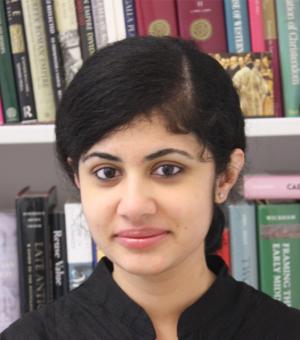 After spending the greater part of my adult life as a student at the University of Delhi, India, I arrived in Oxford to read for the DPhil in English in 2012. As an Ertegun Scholar, I wrote a DPhil thesis entitled "Unlikely Readers: Negotiating the Book in Colonial South Asia, c. 1857–1914." That work reflects my longstanding research interests in reading practices, the history of the book, and the cultural and literary history of South Asia.

Ertegun House kept me in sandwiches for four years, gave me an incomparable work space and the world’s most comfortable office chair, excellent kitchen conversations, a wonderful mentor, and the financial support to read and write, organise conferences, workshops, and a seminar series ("Unconventional Archives: Literature and the Uses of History” in January 2014, “The Global History of the Book, 1780 to the present" in December 2014, and “The Archive and Forms of Knowledge” from May 2014 to June 2015).

“Of Greasy Notebooks and Dirty Newspapers: Reading the Illegible in The Village in the Jungle.” The Journal of Commonwealth Literature 50.1 (March 2015): 59–73.

After I left Oxford in 2016, I moved to the US as a Junior Fellow at the Society of Fellows, Harvard University. Since July 2018, I have been an Assistant Professor of English at Yale University.

I visit Oxford and the House as often as I can and am always happy to hear from other Ertegun scholars.