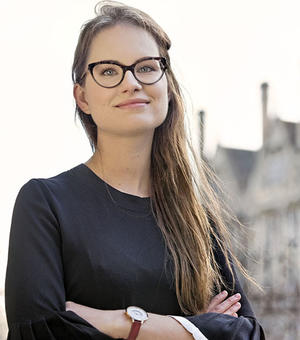 During my year as an Ertegun scholar at Magdalen College, I studied for an MSt in Modern Languages, and achieved a distinction in my course. I took classes on Cultural Studies, Comparative Criticism, German History of Ideas, and Walter Benjamin’s thought, as well as French reading classes. I also convened the graduate discussion group at the Oxford Comparative Criticism and Translation research centre. In Trinity Term, I wrote my master’s dissertation about Paolo Sorrentino’s recent critically-acclaimed film Youth and Thomas Mann’s landmark modernist novel Der Zauberberg (The Magic Mountain) under the supervision of Prof. Ben Morgan. Throughout the year, I presented my first two academic papers, wrote my first academic review, gained some valuable teaching experience, and acted as a graduate representative at my faculty. One of my essay submissions that year went on to win the American Comparative Literature Association’s Presidential Master’s Prize for the best master’s paper on a comparative topic. My essay was entitled ‘World Literature and Literary Value: Is “Global” the New “Lowbrow”?’, and was published in The Cambridge Journal of Postcolonial Literary Inquiry in January 2018 (see here).

I had an amazing time as an Ertegun scholar. The academic and financial support provided by the programme is fantastic, as is the exceptionally welcoming and friendly atmosphere at the Ertegun House. I enjoyed our Wednesday seminars and the rich cultural programme consisting of great trips and outings (I went to almost all of them!), and took full advantage of my fabulous study space and the opportunity to organise various academic events at the Ertegun House. I co-hosted with OCCT a talk on the philosophy of art, given by Prof. Eric Hayot from Penn State, who visited the Ertegun House on my invitation in May, and a large group of Ertegun scholars participated in his great workshop on academic writing for the Humanities. I also really valued more informal occasions to chat to other scholars in the kitchen, or organise our own film evenings, and even one attempt at a book club format.

I stayed in Oxford to study for a DPhil in Modern Languages as a resident Ertegun alumna, with funding from the Clarendon-Merton Modern Languages Scholarship. Following on from my master’s dissertation, my DPhil thesis explored the cultural impact that Der Zauberberg has made beyond academic circles. I analysed the novel’s many and varied literary and cinematic afterlives, looked at its place in the public imagination, and compared how readers with different degrees of academic training approach it and what they make of it. My main goal was to challenge established academic ways of studying canonical works of art and their cultural reception. This comparative project spanned ten decades, ten languages and fifteen countries on five continents. In October 2019, I started a post-doctoral research fellowship in Modern Languages at All Souls College - which means that I'm still in Oxford and get to regularly visit Ertegun House.

My heartfelt thanks go to Mica Ertegun for her generosity and vision, and to everyone who has helped her set up this wonderful programme, including the past and current Ertegun directors and administrators, for their unwavering support. I hope to be an active Ertegun alumna in the years to come!