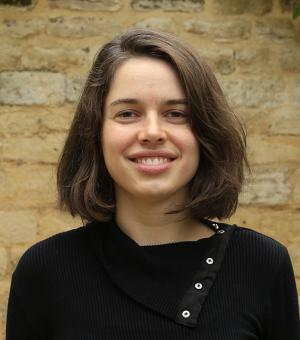 MPhil in Greek and/or Latin Languages and Literature

Classics has attracted me since childhood with the allure of the accessible inaccessible, the ancient world made tangible. But I did not begin my university career yielding to this allure: I took my bachelor’s degree with distinction at the University of North Carolina at Chapel Hill, majoring in Biology (Botany concentration) and minoring in Modern Hebrew and Music History. Following graduation I worked for a year as a tutor and as a regulatory specialist for a wine importer; this gave me space to recognise what I truly cared about enough to engage with indefinitely. Classics, which had formed a cleverly constructed leitmotif in my life for years, asserted itself with sufficient force that I returned to school for a two-year post-baccalaureate graduate certificate in the discipline. This took me back to the University of North Carolina, where I was privileged to engage with the faculty and received notable encouragement from Greek instructors in conceiving and developing my romance with the language. The current of my thinking runs towards big questions: Why are people so compelled to tell and experience stories, and what do these stories do for our lives; what are stories really? How does creative use of language reflect and influence people’s thoughts; why do authors make particular choices in structuring their texts?

The focus of my first year at Oxford was a self-designed course of study, Greek Narrative, in which I learned to analyse Homer and Greek historiography from structural and narratological angles. That year I was also privileged to receive some tuition in Old Persian, and am proud to have been one of the eight young women who together with their coxswain won the 2016 Christ Church Regatta for Merton College (the university’s annual novice regatta). My second year at Oxford saw another foray into new territory, as I undertook formal study of ancient history for the first time through a taught component in Documentary Papyrology. Oxford is a world-leading centre for papyrology, and it was a real honour to produce an edition of a previously unedited papyrus from the Oxyrhynchus collection. My thesis, the third of my course components, examined the signification of a particularly polysemous adjective, skhetlios, within the artificial poetic language of the archaic Greek epic poems. I used a traditional-referential approach, arguing that skhetlios is a term that marks a character or action as resistant to the major form of order that undergirds each poem’s thematic framework: thus, resistant to order-as-justice in Hesiod’s Works and Days, or resistant to ordinary limits on human behaviour in the Odyssey. Both Amin Benaissa, my course supervisor and papyrology tutor, and Adrian Kelly, my thesis supervisor, were excellent in their roles, and I owe a good deal of my success and ultimate Distinction mark in the MPhil to their guidance.

I am currently a Classics Faculty/Stonehouse Foundation-funded DPhil student in Classical Languages and Literature, examining the suitability of the ‘traditional referential’ critical approach for understanding Archaic Greek epic (such as Homer and Hesiod) by testing the same method on much later Greek epic (such as the Posthomerica of Quintus Smyrnaeus). I also continue to pursue an interest in documentary papyrology.

The Ertegun Scholarship is and will always be a tremendous blessing in my life. I would not have come to Oxford without it: I aspired to study Classics at Oxford since childhood, and often thought my road had taken too sharp a detour for it ever to happen. But I made it and gained a master’s degree (and found an Oxonian husband). Mica Ertegun’s commitment to the arts and humanities has made that possible; I could not but be gratefu