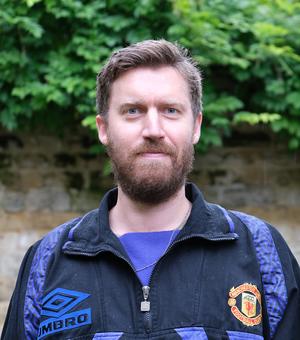 Itamar has a BA from the prestigious Bezalel Academy of Arts and Design, Jerusalem with a focus on painting, sculpture, art history & theory and an MA in Middle Eastern History from Tel Aviv University with a focus on Indian Ocean History, the Global History of Labour, British Aden, and Islamic Studies. He also spent a semester as an Erasmus+ Scholar in the Department of Global History at the Freie Universität Berlin in Germany. Since completing his Master’s, he has worked as a research assistant for a faculty member at Tel Aviv University. He is fluent in English and German in addition to his native Hebrew and has an excellent working knowledge of Gujarati and Modern Standard Arabic. He is an artist, primarily of figurative and decorative painting inspired by Arabic calligraphy, and a musician who has written, recorded, and performed original music in Tel Aviv and abroad.

Itamar plans to study the network infrastructures which preceded British colonialism in the Western Indian Ocean and how trade in this area was structured around kinship and community, particularly the Parsi community during the British Raj. He aims to go beyond dominant Weberian and Marxist models for explaining mercantile capitalist development and is interested in bringing back more inclusive approaches to history-writing which look at cultural hybridity in contrast to the tradition of national historiography that dominate Israeli academia.