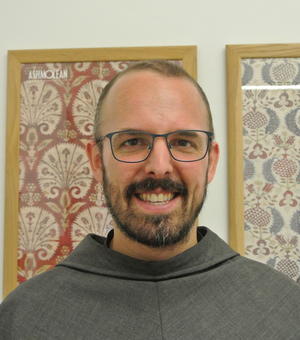 Andrew has a degree from the University of Notre Dame (BA in Politics and German language and MA in Early Christian Studies) and a degree from the Pontifical Theological Faculty St. Bonaventure Seraphicum (Theology). After his first degree Andrew spent some time as the Middle East Correspondent for Compass Direct News in Istanbul but then embarked upon his religious formation as a Franciscan Friar and preparation for the Catholic Priesthood. He was previously Chaplain at the Sisters of St. Francis of Perpetual Adoration in Mishawaka, USA. He is a multilingual scholar (Turkish, Italian, German, French, Lebanese Arabic) and still taking on new languages! And he plays ultimate Frisbee!

His vocational aspiration is to foster community among minority churches and Muslims in the Middle East and he hopes that this Masters in Syriac Studies will support this endeavour. He believes that this field of study borders several academic disciplines, meeting at the intersection of cultural and religious spheres and can help his future work in promoting interfaith and scholarly dialogue as a Franciscan priest among Muslims and Christians in Lebanon and Turkey. His main interest is poetry as a vehicle for the study of religion, sacred text, and society more broadly.