Who’s been sitting in my chair? Why 'break-ins' to the Ertegun Study Rooms are sometimes a good thing. 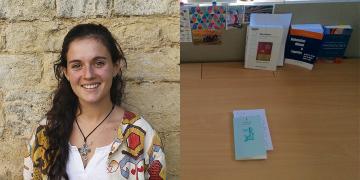 A few days after I turned 24 in Oxford, I stopped trying to join the pack of wild horses in Port Meadow and reclaim my youth long enough to drop by my desk at Ertegun House. Usually home to my linguistics textbooks and some dappled sunlight, this time my desk sported something else: a little blue volume with a handwritten letter slid between the pages. I immediately suspected Emily, Stefano, or Raphaël, my overwhelmingly charming office-mates who share access to our study den. But as soon as I read the first sentence of the letter, I knew we had had a break-in: the first sentence read, “Julia, as we say in Irish, bappy hirthday.” This was scandalous! Emily is from Virginia, Stefano is Greek-Italian, Raphaël is French. None of them speaks Irish.

Thankfully, the birthday card was signed and all became clear. This was a classic case of a security breach in the name of the Ertegunian mission: “enlarging one's knowledge, extending one’s mission, exchanging one’s ideas.” Ertegun Scholar Conor Brennan (Ireland, MSt Candidate in Modern Languages) had evidently snuck in and accompanied his note with a copy of Brian Friel’s play, Translations, hoping that some impressionable young linguist — me — would be influenced.

Conor’s trespassing is as unsurprising as it is adorable, given the culture we have in the House of enabling each other’s incredibly specific obsessions. At the end of Michaelmas Term six weeks prior, I gave a presentation in our Ertegun Wednesday seminar about my interest and work on the revitalization of minoritized and endangered languages. Conor and I followed up at procrastination hydration breaks in the kitchen, where he shared stories of his relationship with the Irish language and I quizzed him about its status in the education system. His love for Irish was palpable and complicated, and it made me want to understand the dynamic history and present of the minority language next door.

When Conor went home to Ireland for the holiday vacation, as he told me in his birthday card, he searched for the play by Brian Friel — a jewel of a work about Irish hedge schools in Donegal — that my presentation made him think of. Not finding Translations on his shelf, he bought a copy and invented a new Ertegun local mail system: Desk Delivery.

It is now very difficult to do any work at my desk because I am drawn to reading a brilliant play about language and community resistance in the home country of my friend Conor. However, I think that’s exactly what my desk is for.