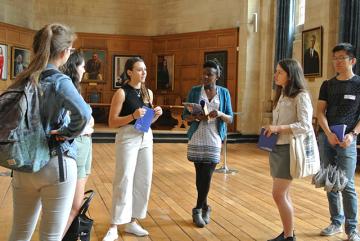 While many of our Ertegun adventures have taken us farther afield, on 1 June we mounted an expedition to something a little closer to home: Rhodes House in Oxford. Resident Alumna Karolina had initially suggested this trip, having been thwarted by busy schedules in her previous attempts to see the house during one of the Rhodes events throughout the year. While some of us wondered if it would seem an odd request from one scholarship cohort to another (‘May we take a tour of your house?’), Rhodes House generously agreed to the intrusion, and our curiosity soon overcame any potential awkwardness.

On the day of the tour three current Rhodes scholars met us at the entrance, ushered us through the formidable door, and handed us booklets of information about the Rhodes Trust. For many in the Ertegun cohort this was the first time inside the building, and we were all impressed. In true humanities style, two of our classicists were intrigued by Greek inscriptions above some of the doorways (the more pun-minded among us were disappointed that they didn’t turn out to be references to Rhodes-y Fingered Dawn), and we arrived full of questions for our guides.

Our first stop: the rotunda, where we paused to examine the names of both allied and German Scholars who had fought in the Great War. Next, we passed through a gallery featuring paintings of Rhodes alumni, where our guides noted with satisfaction the inclusion of faces beyond the white male majority so often seen in Oxford halls. We then passed through the garden and dropped by a lunchtime yoga session before perusing the library. As we chatted with our guides and exchanged information and anecdotes about our respective cohorts, it was satisfying to ease beyond the insularity often present in scholarship groups. Although perhaps not as adventurous as some of our other Ertegun outings, it was satisfying to see a new corner of Oxford and to meet more of our fellow Oxford students (and for Karolina to finally cross Rhodes House off her sight-seeing list).