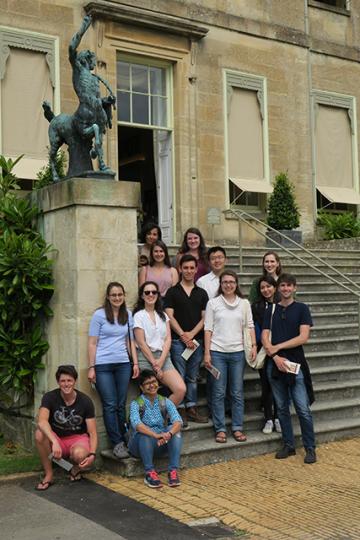 The visit to Kelmscott and Buscot on Saturday 9th June was the very last trip for the Ertegun cohort of 2017-18. For several weeks, word was floating around the house: “Kelmscott and Buscot is our last gathering, don’t miss it!” On the bus, you could see what Kelmscott and Buscot meant to scholars. For those staring through the window, this last trip was a celebration of their newfound freedom. For those with laptops on their knees, the approaching deadlines were not sufficient reason to deprive them of this last communion. This day trip was thus a nice break from thesis writing and exams preparation.

Our first stop was Kelmscott Manor. Built circa 1570, this house is famous today for having been the Cotswold retreat of William Morris, an English textile designer, novelist, poet, and socialist activist. His work was important to the revival of traditional British textile arts. He referred to Kelmscott Manor as a place for authenticity and a key inspirational element for his writings and designs. The house, which has remained intact since William Morris left it, is a small museum where visitors can admire furniture, textile patterns, paintings, and all sorts of creations of Morris, his daughter Jane, and their friends and colleagues. Interestingly enough, the University of Oxford acquired the house after the death of Jane Morris. It passed it to the Society of Antiquaries in 1962. Just as interesting as the manor were the gardens. The wonderful smell of roses in the front garden made many of us pass through the gardens twice, before and after entering the manor.

With our eyes and noses full of Kelmscott, we got on the bus heading to Buscot. On our arrival, Jill was waiting for us with an incredible surprise picnic! The picnic was such an experience that we now refer to that trip under the name “the Kelmscott-picnic-Buscot trip”. After this enchanted break, we entered Buscot Park.

Built in the second half of the eighteenth century, the house in Buscot Park is an impressive building standing on a green hill. One could only be impressed by the luxurious interior of the mansion where the Faringdon Collection is displayed. Among the many imposing paintings were Rossetti's Pandora, Rembrandt's portrait of Pieter Six, and, my favourite, Burne-Jones's The Legend of the Briar Rose. In front of the majestic Burne-Jones's series, Michele played the piano and drew smiles from the faces of other visitors. I was surprised to learn that the present Lord Faringdon lives in the house, acquiring new works of art and maintaining a family home spirit in Buscot Park.

The house was linked to one of the park’s lakes through a long “Alhambra-like” water garden with series of rills and fountains. The park was a stunning composition of formal gardens, lakes, and woodland. And it was on a swing in the middle of Buscot Park that Ursula, Emily, and I recollected memories of our exciting year within the Ertegun community.