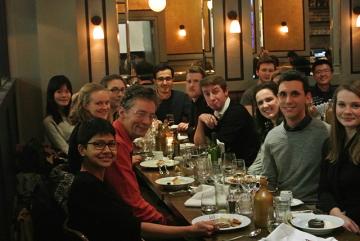 The weekend just before the start of Hilary Term saw one of the most well-attended Ertegun excursions in living memory, when a gaggle of scholars descended upon the Prince Wales Theatre in London to witness an inimitable spectacle – a production of The Book of Mormon.

This musical comedy from the pen of Trey Parker and Matt Stone (the creators of South Park) set to music by Robert Lopez (of Avenue Q fame) satirises elements of the Mormon religion, particularly the history of its inception and its missionary practices. It follows two young missionaries, eager overachiever Kevin and his bumbling sidekick Arnold, as they embark on a mission to rural Uganda. The locals, plagued by famine, disease, and violence, are unreceptive to their message, but are won over by the sidekick who takes some creative liberties with the Mormon canon, eventually culminating with the locals proselytising his “Book of Arnold” (Part IV to the Mormon Bible trilogy).

The Book of Mormon plays on many grave issues of modern-day Africa, most importantly the AIDS epidemic and the neo-colonialist aspects of Western missionary activity. It also calls into question the veracity of the genesis of the Book of Mormon and explores the suppressed sexuality of young missionaries. It does so in classic Parker and Stone fashion by indiscriminately ridiculing everyone and everything, foregoing subtlety for maximum outrage and total hilarity, resulting in a spectacle that is certainly not for the faint of heart.

While the reception was generally positive and the humour seemed to land with the Ertegun audience, it is undeniable that this is a controversial piece of musical theatre if ever there was one. One of the Scholars was so troubled by the stereotypical portrayal of the Ugandans as infantile primitives who are saved and enlightened by the noble white missionaries, and by the fact that the authors chose the LDS Church in particular to pick on, that she left the theatre after the first half of the show. She is justified in taking objection to this, of course, but it should be noted that these themes are expanded upon in the second half and the takeaway from the culmination of the story is overall positive in my opinion.

After all was said and done, my face was aching from grinning like a madman for two-and-a-half hours, and I was left with a deep sense of satisfaction, amplified by the fact that this was my first ever experience of musical theatre. We followed our viewing up with a lovely dinner at a nearby restaurant and caught the train back to Oxford. It goes without saying that the topic of the show and some of its elements inspired many a heated discussion in Ertegun House over the course of the following week.