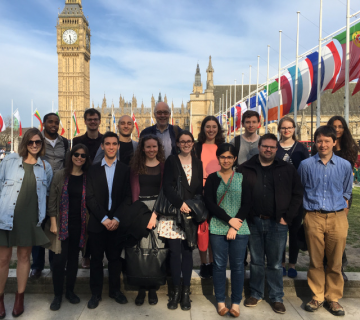 Given my research interests in the Gothic Rival and nineteenth-century architecture, one would think that I would have spent our recent tour of the Houses of Parliament, whose ornament and interior decorations were designed entirely by Augustus Pugin, obsessing over architectural and decorative details. And, I did spend more than a couple minutes admiring the recreated Pugin wallpaper in the secondary debate room of the House of Lords, which regally covers the walls of the rather modern room in a deep scarlet hue over which Pugin laid a beautiful gold and green vegetable pattern. It was also worth the time to identify which well known paintings were copied for the portraits of the Tudor family that line the upper walls of the antechamber (and mailroom) of the House of Lord’s Chamber. Holbein’s portrait of Anne de Clèves is hard to mistake even from ten feet down. The entirely gilded (in practically pure gold) royal dais in the House of Lords is as impressive as one would expect. And, our tour group did keep our eyes open for any stained glass. All of the glazed windows in Parliament, except those in the House of Lords, were provided by John Hardman who originally designed and manufactured metalwork until Pugin cajoled him into opening a stained glass studio. Fortunately, we can go see other Hardman windows in the Chapel of Magdalen College back in Oxford, because rather than studying the architecture our entire group spent the hour and half enthralled by our tour guide.

In between keeping us all in step and navigating a very intricate set of hallways, our energetic tour guide provided wonderful descriptions of the various traditions and histories that pervade the Houses of Parliament and an excellent introduction to the British political system that works around and through these rituals. I stopped studying the golden throne in the House of Lords to listen to how, when the Queen opens Parliament, in order to address the House of Commons she has to send an emissary, ‘Blackrod,’ to traverse the halls from the House of Lords’ Chamber to that of House of Commons, since she herself is not allowed to enter the latter, in punishment for her ancestor Charles I’s attempt to arrest Members of Parliament in January 1642. It was fascinating to consider how the tradition of Blackrod’s walk to the House of Common’s doors, which are then shut before his arrival and only opened after he has knocked hard enough to dent the wooden door, imbues every opening of British Parliament with a reminder of the balance of power maintained in the United Kingdom’s constitutional monarchy, and how it has evolved across history. The twentieth-century reconstructed interior of the House of Commons’ Chamber is much more interesting when it is accompanied with stories of how a new Speaker of the House of Commons must be dragged from behind the last bench in the Chamber and placed on his/her chair. Overall the tour was a wonderful introduction to the intricacies and particularities of the British halls of political power, which even managed to overshadow, at some points, the spectacular architecture of the halls themselves.