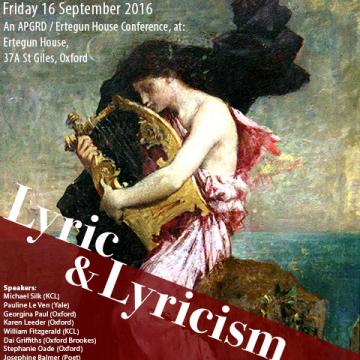 A one-day interdisciplinary conference at Ertegun House centred around the expression and interpretation of lyricism at the juncture between music and word. The day brought together academics and performers from different disciplines with the aim of asking what constitutes the essence of lyric and what can it mean for us today.

The day opened with a Classics panel (one paper on the Greek side, one on the Latin side), both fantastic papers which introduced many of the key lyric themes for the day – aesthetics, form, interpretation, and permeable generic boundaries (to list but a few). After a coffee break we were treated to a lecture-recital by renowned bass-baritone, Stephan Loges, and pianist / academic Natasha Loges. Beautifully performed music was interwoven with critical analysis and an overall concern for the lyric integration of text and music. The room was positively buzzing with excitement by the time lunch rolled around. The afternoon session opened with a German / Modern Language panel, two exploratory and innovative papers that pushed at the very edges of lyric interpretation, forcing us to rethink all our previous assumptions. This was followed by a music panel, the first paper about popular music, the second (my own) about classical, both of which were met with thoughtful responses. The final speaker was poet, translator and Oxford alumna Josephine Balmer whose lyric readings left delegates stunned (one delegate remarked that this was the first conference at which she had cried, and much nodding confirmed that she was not alone).

I was delighted to find that the day drew a number of very illustrious academics and, as the day progressed, excitement around the subject grew until ideas and conversations were bouncing around, and the walls of Ertegun were resounding with animated voices. There was fantastic engagement between subjects, with all speakers drawing on their own disciplines but moving beyond their familiar perspectives to think in truly cross-disciplinary ways about genre, reading methodologies, and indeed the wider arts.

Speaking from a personal point of view, I feel immensely privileged to have been able to gather together such incredible intellects for a day centred around my own interests and research, and to have plumbed these intellects in such a stimulating way. Moreover, it was truly a wonderful opportunity to meet and form bonds with these fascinating people, many whom I have admired from afar for a long time, and to share my own research with them. I came away with new ideas, stronger beliefs, and a conviction that there is a real academic appetite for cross-disciplinary events of this kind. One of the German professors who attended has since approached me about the possibility of developing with her a ‘talk shop’ centred around the classical tradition but drawing together people from across the Humanities. Perhaps this conference then was only the beginning of my involvement in a larger conversation.

The organisation of the event was not without its challenges, most crucially the withdrawal of my keynote speaker with two days notice (on account of a personal crisis). Disappointing though this was, the extra time was highly beneficial for allowing discussions to fully develop and new ideas to be aired. With the help of Jill (as well as Kelly and Sarah before her) I learned a great deal about the administrative side of things, and I benefitted enormously from her help before, during and after the conference. Bryan, of course, is always an inspiration.

I am tremendously grateful to the Ertegun Scholarship Programme for the resources, support and guidance, without which I would not have been able to imagine, let alone organise, this extraordinary day. I would like to thank the board once again for the extra money for the musicians’ performance fees. We work in the Humanities because we love the arts and recognise their joy and transformative potential, but sometimes academia can underestimate or suppress the aesthetic and the emotional. The performances that were integrated into the day served as a poignant reminder of what should not be lost - the power of word and music - and what possibilities arise when the emotional and the intellectual combine.