King Lear at the Barbican Theatre 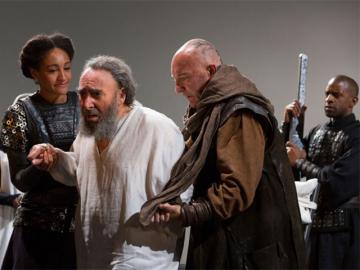 On the evening of Monday 14th November, a group of 27 Ertegun scholars and alumni travelled to London for a performance of the RSC’s King Lear at the Barbican theatre. This was an impressive production that divided opinion, and inspired more than enough discussion to occupy us on the coach journey back to Oxford.

Antony Sher joined the Royal Shakespeare Company in 1982 as a relative unknown, to play the Fool in Adrian Noble’s King Lear. 34 years, two Olivier Awards and dozens of leading roles later, Sher is at last taking on the title role, in a production of the play by the RSC’s incumbent artistic director Gregory Doran. Lear is widely regarded as the last great part, the final test of a Shakespearean actor’s mettle. Expectations are high; but Sher’s performance is not a show-stealing one. His Lear deliberately – at times, frustratingly – doesn’t command the stage. He first appears in a raised sedan chair, presiding over the division of his kingdom as the gods’ intercessor on earth. Sher draws our eye on his podium, but he can do little else: there is no room for him to rage and storm, and he cannot lash out at those who anger him. His delivery in the first act is meandering, at times almost monotonous. This is undoubtedly a conscious decision on Sher’s or Doran’s part, and it serves to emphasise the confused, fragmentary nature of much of Lear’s dialogue. It does so, however, at the expense of those glimpses of poetic brilliance which audience members familiar with the play will be anticipating.

Sher excels in Lear’s quieter moments; indeed, a brief exchange between Lear and his Fool, perched atop some suitcases en route to Gloucester’s house, proves one of the most affecting in the entire production. Comedy, too, is a strong suit for Sher, and as he jokes and capers on the heath I am reminded, however distantly, that he was last seen playing Falstaff in the RSC’s Henry IV Parts 1 and 2. This is unquestionably a performance that grows over the three-or-so hours of the production. Sher brings a rare dignity to the devastating final scene, and his handling of the Folio Lear’s five successive “never”s – described by editor R. A. Foakes as ‘the most extraordinary line in blank verse English poetry’ – is nothing short of masterful.

The ensemble is generally strong. Of the sisters, Kelly Williams deserves special mention for the disturbingly saccharine cruelty she brings to Regan. Paapa Essiedu follows his outstanding season as Hamlet with a similarly charismatic Edmund, whose disaffected swagger is punctuated with flashes of seething fury at the injustices and affectations he perceives in the world around him. Unusually – and refreshingly – Edgar is charismatic too. The character obstinately resists becoming the moral centre that critics and audiences have so often willed him to be; but Johnstone’s Edgar, while no hero, effectively occupies the role of appalled onstage witness to the play’s manifold horrors, seeing and speaking them feelingly. Both Troughton’s Gloucester and Byrne’s Kent dominate their early scenes with a kind of brute force that reminds us that nobody in the world of this play is altogether harmless. By the second act, however, they are broken men. Gloucester’s awkward, seated shuffle off the edge of ‘Dover Cliff’ is excruciatingly pitiful, and at least as hard to watch as the infamous blinding scene that drives him to it (complete, in this production, with a gruesomely audible splatter of blood). As he makes his final exit, meanwhile, Kent’s voice cracks with an emotional exhaustion so palpable that even the most hardened of spectators might find themselves reaching for their tissues.

Doran’s vision for the play is impressive, if not particularly groundbreaking. The set and costumes in the first act gesture towards a quasi-Russian feudalism, but after the blinding of Gloucester, the walls are raised to reveal a swirling white emptiness, and a withered tree that might be a nod to Beckett’s Waiting for Godot. In literally staging the plight of the ‘poor naked wretches’ invoked by Lear, meanwhile, Doran takes his lead from Kozintsev’s stunning 1971 film of the play; here, as in Kozintsev, these ragged figures are present long before Lear cares to notice them, a sobering marginal note on the human cost of political upheaval.

This is, on the whole, an effective and affecting production of a play which, since the mid-20th century, has taken on a significance far beyond itself. In recent years, Lear been hailed as Shakespeare’s crowning achievement (puns definitely intended) and as a play for our times, a startlingly prophetic post-modern or post-post-modern masterpiece. We go to the theatre expecting to have our worldview shaken, and to come out broken and mended. But Lear is a tricky, messy play in performance, with a baffling subplot and a tragic anti-protagonist who sometimes struggles to finish a sentence, let alone speak a soliloquy. Sher and Doran attend to these difficulties, particularly in their portrayal of Lear. If this production doesn’t quite live up to expectations, it is partly because those expectations were so high.