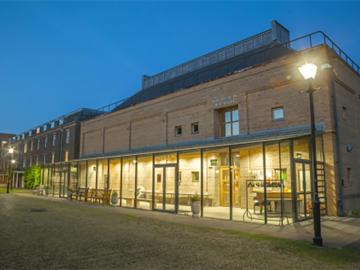 On Wednesday January 7th, 2018, we had the opportunity to attend a concert showcasing the work of fellow Ertegun Scholar, Diale Mabitsela.  The concert — hosted in the Jacqueline du Pré music building at St. Hilda’s — was dedicated to the musical compositions of Music students: dazzling pieces with two pianos were followed by electronic ones pushing the boundaries of the very idea of ‘music’.

Diale’s compositions Easterly Wind and Anthony of Padua — the first one electronic and the second with two pianos and two keyboards performed by fellow students — were exciting and mesmerising examples of ‘minimalist music’. The term means a lot of different things to different musicians, but for Diale, I think, it poses the question of how much one can create, using as little as possible. Anthony of Padua creates an incredibly vocative and compelling experience by interspersing single notes or short pieces in periods of complete silence. The interplay between sound and silence created a captivating energy, on the one hand calling the audience to fill the ‘emptiness', but on the other urging it to appreciate the still perfection of silence. The result was a powerful break from conventions and rules, not for the sake of breaking, but rather of creating. The emotional intensity and aesthetic beauty of this piece stands as a testament of the value of ‘minimalism’ in music.