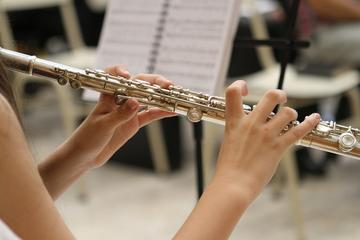 Ertegun House is blessed not just in budding humanities scholars, but in musicians. This year at the house we had a critical mass of Ertegun scholars and alumni who also play music, with multiple singers, pianists, and brass and woodwinds players in our cohort. Rose Campion, an MPhil in Music, and I had not been here long before we saw an opportunity. By late Michaelmas, we decided we could put together a compelling spring concert just from the musicians within our own ranks—an ErteConcert, if you will.

Saturday’s concert, happening as it did on a spring afternoon in fifth week, proved a gracious diversion from the rigours of dissertations and exams. It was short but very sweet—five musicians combined in different configurations to play six short pieces from the long nineteenth century. With thanks to Oxford’s centuries-long choral tradition, I was delighted, several weeks ago, to find that I could form an SATB (soprano, alto, tenor and bass) quartet just from the house’s choral singers. We sang Felix Mendelssohn’s brief but achingly lovely “Die Nachtigall” and Robert Lucas Pearsall’s madrigal-esque, deceptively simple “Who shall have my lady fair?” I sang “Widmung,” a Schumann lied, and Rose paired contrasting Grainger and Rachmaninoff piano pieces from the turn of the twentieth century. The centerpiece of our programme was Ursula and Frazer’s flute and piano duet by Cécile Chaminade, which was continually surprising in the best of ways—full of twists and turns, melismatic runs and trills, and changes of color and mood.

At the close of the concert, I took the opportunity to announce the foundation of a new music society based at Ertegun House. I had for some weeks considered starting a madrigal society, devoted to the group exploration of vocal chamber music—not for performance, but simply for its own sake, as amateur singers might have done in the sixteenth century. When I introduced the idea after the concert, many audience members were delighted. So we held our inaugural “MadSoc” meeting right then and there! We sang the two concert pieces once again, but this time as group, and then moved on to some other madrigals and motets.

Many thanks to all the scholars and friends who joined us—it was such a joy to share our music with you. And of course, my greatest appreciation goes out to our players for all their hard work: Ursula Westwood (flute/alto), Andrew Sanchez (tenor), Frazer MacDiarmid (piano/bass), and of course my co-organiser and pianist/trombonist extraordinaire, Rose. My hope is that with this concert and new music society, we will have laid the foundation for another year of rich musical life at Ertegun.