Romeo and Juliet at the Barbican 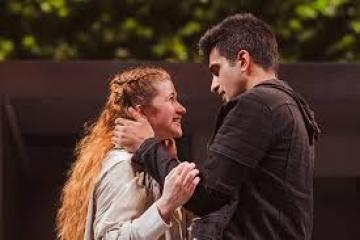 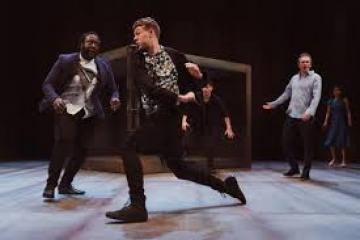 For the second of Ertegun’s Romeo and Juliet double-feature this term, the scholars battled National Express delays, Tube closures, and rather frigid London winds to attend the Royal Shakespeare Company’s production at the Barbican Centre.  The modern interpretation of this classic text divided the group and prompted many conversations the following week in the Ertegun house.  Rose and Cassie, like Capulets and Montagues, didn’t see eye to eye on the play…

Inspired by their heated discussion on the train home, these star-crossed scholars duel – with words not sabres – on the finer points of the production:

Rose: Even if it ends in daggers and poison? My first encounter with this play was being cast as the nurse in my ninth-grade English class, so I don’t have too many fond memories of it.

C: Beats being a bearded Benvolio!  I was thinking that perhaps R&J is staged so often because it’s a play that speaks to modern themes very well – relationships between parents and children, hostility within communities, partisanship pushed to its limits.  Whenever I see Romeo and Juliet I’m also reminded of how central the idea of ‘star-crossed lovers’ is to how we represent romantic love culturally (and the problems with this)!

R: True, especially because there are so many ways it has been reimagined. I loved how Baz Luhrman set it as a 1990s gang war in his film, but this Barbican production didn’t seem to suggest any one time or place.  The only thing on stage was that seven-foot tall industrial cube!  I wanted it to be a bit warmer and inviting…Your take?

C: The set design was a far cry from all the various film adaptations, but I quite liked the fact that it was so nondescriptly modern.  I don’t think a play needs to be set in a recognisable place/time for it to have a political message.  One of the benefits of dislocating R&J is that you can invert themes/characters in powerful ways. The gender-blind casting was key for me.  I thought it was neat that the Prince, the figure of justice, and Mercutio, Romeo’s fiery best-friend, were both played by women. Mercutio was so animated on stage – she moved like a live wire. Electric! But I remember you really disliked her characterisation!

R: Yes, she definitely had more energy than the rest of the cast combined, but her acting was borderline absurd for me.  Also, Mercutio and Romeo both seemed quite puerile – just lads looking to have a good time crashing a party they weren’t invited to.  It’s interesting to see Romeo and Juliet acting their age for once, but this focus on their adolescence made these profound lines sound a bit hollow coming from teenage lips.

C: Yes, but surely you agree that Scottish Juliet was beautifully played…

R: Absolutely! She stole the show for me in the second half.

C: Friar Lawrence and the Nurse were great supports too. What I loved about this production was the sense that there are different models of parenthood, right? Shakespeare is clever here: you have two sets of biological parents who are so blinded by their hatred to parent effectively with love.  Then there’s the Friar and Nurse - both childless and older - who substitute as supportive parents.

R: But let’s talk about the strangest modernisation.

R: No, that awful music! I know it’s supposed to be relatable, and I can’t expect Bernstein-level scoring for every production, but as a musicologist (and a person with two ears), I have to draw the line at the Electronic Dance Music.  That beautiful balcony scene with the rising sun was so tender and beautiful, and then we were assaulted with this ridiculous bass and synth garbage – I half-expected Romeo to come out as an amateur DJ trying to drop his next mixtape.

C: It was jarring, you’re right. But that’s an interesting point to pull out, and perhaps one of the tensions inherent in staging Shakespeare with a mind to difference. How much does a new interpretation cut back what is valuable about the original? This production cast into relief what is both lost and gained when you add new elements.

R: Yes, electronic music on one hand and gender-neutral casting on the other.

C: I do think despite its flaws that this production had moments of inserting something quite interesting.

R: Yes, it certainly gave us plenty of topics to while scrambling to catch the last train home.

Cassandra Capulet and Rosebud Montague (finally breaking out of her type-cast role as the Nurse) can be seen performing their own rendition of the balcony scene from the first floor of the Ertegun house next weekend.