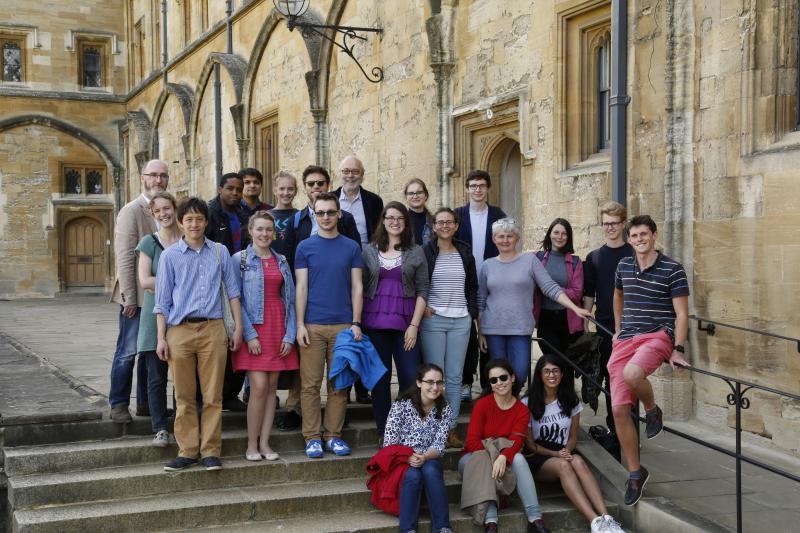 This tour was arranged for us by Scholar Frazer MacDiarmid, who is a student at Christ Church and a choral scholar in its famous cathedral choir. The unique Henrician foundation incorporates both a diocesan cathedral and an Oxford college, with the Dean of the Cathedral serving as the head of the College.

The tour began by scaling a magnificent spiral staircase designed by Sir Christopher Wren in Tom Tower. Atop the tower resides Great Tom, a bell which was originally cast for the nearby Osney Abbey, and was at the time the largest bell in medieval Europe. Tom strikes one-hundred-and-one times shortly after 9pm Oxford time to summon the students back before the erstwhile curfew. The tour then continued in the Great Hall, with special reference to the Alice window and the exploits of Charles Dodgson and the then Dean’s daughter, Alice Liddell. The tour then once again diverged from the standard tourist trail, to the cathedral and master’s gardens. Of special interest was the door which Charles I had installed when he was holed up in Christ Church, at the heart of royalist Oxford, during the English Civil War, so that he could visit his wife Henrietta-Maria who resided at Merton.

Finally, the tour concluded at the Pococke tree, named for a seventeenth-century Regius Professor of Hebrew who is thought to have planted it in 1636. Its vast tendrils spread out in all directions, often with improvised supports, and one of its branches has grown back into another to create a continuous loop. Scholars were invited to stay on to hear Frazer at Evensong. Special thanks are due to him and to Jim Godfrey, a Cathedral Verger and our tour-guide extraordinaire.