A live screening of the Royal Opera House's The Nutcracker 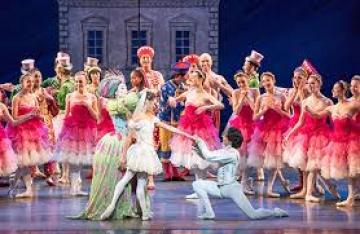 I’m not sure which is a more embarrassing confession: that this screening of the Nutcracker was the first ballet I’ve ever seen, or that I had no idea that its performance in mid-December was at all significant. Luckily, both of these inexcusable cultural blunders having been rectified, there are now two fewer ways that I can humiliate myself at a dinner party.

This screening came at a particularly appropriate time for the scholars. The frantic pace of term negotiated, Christmas still far enough away not to require stressful preparations—9th week had cast its agreeable and ever so slightly opiate spell on us once again. The Royal Ballet and the Royal Opera House presented us with a truly splendid gift: the consummate performances of the Academy’s most talented young artists, choreographed by nonagenarian Peter Wright CBE, danced on a stage exuberant and intriguing enough to engage even the most petulant of children. Every one of Herr Drosselmeyer’s movements was accompanied by a shower of glitter, often covering several of the dancers. All of these elements were bound together perfectly by some of Tchaikovsky’s best-loved music, making for a truly enchanted evening.

One of the less felicitous aspects must have been the slightly jarring and awkward ‘interviews’ which were broadcast between the two acts for those not fortunate enough to be in the Royal Opera House itself. The resident ballet expert was former Sugar Plum Fairy, Darcy Bussell, who provided a couple of somewhat vapid exchanges with members of the cast, and who may have mentioned once or twice that she formerly danced the Sugar Plum Fairy. Perhaps it wasn’t entirely her fault: interviewing 10 year olds whose smiles were about as unnatural as their answers were rehearsed, can’t be easy. But I think she got away with it by relating it to her experience of dancing the Sugar Plum Fairy. Radio 3’s own Petroc Trelawny did his best to keep the mood upbeat and the discussion interesting, but for my part, I’m pleased that most people in the cinema weren’t concentrating.

So much did I enjoy the performance, however, that I watched a BBC 4 documentary which takes you behind the scenes in this year’s performance of the Nutcracker. Thankfully, the younger members of the cast were far more at ease, and it was genuinely fascinating to follow Clara (Francesca Hayward) through her journey to one of the most coveted roles in ballet. As an industry, it is ruthless and extremely demanding, but the rewards are often life-changing. Perhaps the most enlightening comment came from this production’s Prince, Steven McRae: ‘You just have to embrace the glitter.’