Much Ado About Nothing at the Globe: lots of fun, a little too much ado 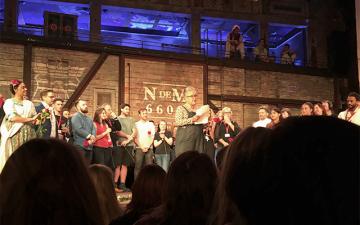 On Sunday 15th October, our group of around 20 Ertegun scholars and resident alumni arrived at the Globe, in the unseasonable sunshine of an October afternoon, for a performance of Shakespeare’s Much Ado About Nothing, directed by Matthew Dunster. We hadn’t realised that we would also be witnessing the last night of Emma Rice’s final summer season, following her brief and controversial tenure as artistic director of Shakespeare’s Globe Theatre. As such, we were treated not only to an energetic and entertaining production, topped off with two raucous jigs, but also to a number of speeches celebrating Rice’s time at the Globe, including a warm and lengthy farewell from Rice herself.

There is, I think, much to be commended about Rice’s vision for the Globe. She has, as she mentioned in her speech, achieved gender parity at the theatre, both behind the scenes and onstage. Her contentious modern lighting rigs have facilitated the creation of beautiful, even otherworldly effects, not least in this production of Much Ado, during Hero’s poignant fake funeral scene. Rice was appointed on the basis of her bold ideas, and while these may have ruffled feathers in the ominously invoked “academy”, attendance at the Globe is up. “Wonder” and “Love”, Rice’s two summer themes, have appealed to theatregoers and drawn in new crowds, and the broadening of Shakespeare’s appeal is something that all bardolaters – myself included – should be willing to applaud.

Unfortunately, in the midst of this vibrant, egalitarian and big-hearted vision, Shakespeare’s plays themselves have become rather lost. The playwright famously deemed a “star of poets”, by contemporary writer Ben Jonson, warrants a brief shout-out midway through Rice’s speech, but sound, lighting, and theatrical innovation are the real stars here. Rice has always approached Shakespeare’s words as a problem to be dealt with, a daunting and confusing barrier to enjoyment, and her discomfort with the language of the plays has tended to bear out in performance.

This production of Much Ado About Nothing, set against the backdrop of the Mexican Revolution, is no exception. The script has been subject to some clumsy editing; Beatrice’s brilliant “you always end with a jade’s trick” – at once playful and barbed – is amended to the comparatively flat “you always end too soon”, presumably for reasons of clarity. The effect of such changes is to downplay Beatrice’s vicious wit in favour of obvious jokes, laboriously annunciated by actor Beatriz Romilly, which render her character at times a little tedious. If the edits to Beatrice’s language do at least serve as an aid to understanding, meanwhile, nothing can explain the baffling additions to Dogberry’s part (played here by Ewan Wardrop), who has been bizarrely reimagined as an American filmmaker with a dubious accent and a very poor grasp of Spanish. Matthew Needham’s Benedick is more successful, endearingly foppish in his interactions with the audience, while it is undoubtedly refreshing to witness Anya Chalotra’s unusually feisty Hero fight back against the false accusations of her infidelity.

Just as music and lighting were the stars of Rice’s speech, so they stood out in performance too; slower songs offered some breathing space in this slightly frenetic production, while the spotlights came into their own once the sun had set, illuminating Hero as she sung her own lament. The specific politics of the Mexican Revolution did feel largely extraneous to the production, but the setting brought colour and an almost palpable dusty heat to the stage, as well as explaining successfully enough the soldiers’ return from war at the beginning of the play.

Despite its many loud and busy set pieces, this was a production that excelled in its quieter moments; Beatrice and Benedick’s awkward admissions of love were thankfully gimmick-free, and both actors successfully captured the characters’ vulnerability in this scene. That is not to say that the loud and busy set pieces weren’t fun. Particularly as a groundling in the bustling yard, it’s hard not to laugh and applaud along as the actors cavort energetically about the stage for your enjoyment. This was, I think, a production greater than the sum of its parts, at times confused and overdone, but always relentlessly enthusiastic in its mission to entertain. Still, I can’t help but feel that Dunster and Rice were having fun in spite of Shakespeare’s play text, rather than because of it. Whether in modern dress or traditional costume, under artificial lighting or the sun, I hope the words will once again take centre stage at the Globe next year; in one bardolatrous audience member’s opinion, the plays would be clearer, funnier, and all the more joyful for it.