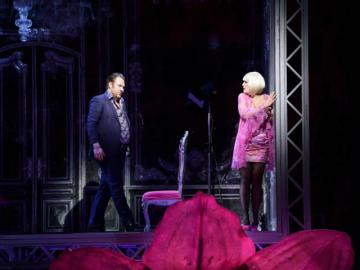 On December 2nd – at the end of a long day and a long yet quick term – more than twenty Ertegun Scholars had a chance to witness transformation. The Royal Opera House production of Manon Lescaut directed by Jonathan Kent is a great example of how traditional opera can be brought to touch upon contemporary issues, problems, and sensitivities.

Puccini’s first successful opera tells a story well-known at his time. Manon Lescaut is based on Abbé Prévost’s L’Histoire du chevalier des Grieux et de Manon Lescaut and Massenet had already been acclaimed with success for an opera with Manon as its heroine. The story is about Manon, a young woman who falls in love with Des Grieux, a young yet poor student and subsequently decides to leave him for Geronte (fun fact: gerontas in Greek means old man) an older but wealthier man. Finding herself, however, bored and restless she decides to leave Geronte and ends up getting arrested with Des Grieux. Vilified and persecuted, she finds a tragic death in the arms of her lover.

From our perspective – from a time where we fight for gender equality and have become sensitive to the insensitivities of the past – Puccini’s Manon Lescaut can be seen as a highly sexist work that once again reproduces most of the stereotypes that our culture has produced (and arguably still produces) about women: women can only define themselves and their existence in relation to a man, women are attracted to wealth and power, women are irrational, impulsive, and hysterical beings, and so on. The profound asymmetry and injustice of the male-centric moral calculus is best seen in the fact that Manon dies while her younger lover does not. Manon’s death is not only a sign of her innate physical weakness as a woman but also of her moral weakness: she deserves to die because she has violated the rules, because she has complex desires, desires not allowed to women.

The greatness of Jonathan Kent’s production is that it takes Puccini’s Manon Lescaut and flips it on its head: what was a misogynistic piece becomes a production calling our attention to the very real and contemporary issues of sex-slavery, domestic abuse and financial (in)dependence, and the general strife for liberation from all kinds of shackles –from oppressive husbands/lovers to deprivations of poverty. To this end, Kent’s production introduces several elements to the stage that are absent from the original libretto: the violence and sexual exploitation of women is shown with an Amsterdam-like sex vitrine, our society’s desire to still watch and enjoy women fail is captured by creating a reality TV set that follows Manon, and the lack of financial independence that defines Manon’s life is stressed by the fact that Geronte’s opulent house can only be seen as kitsch oligarch’s cage. All of these directorial and stage changes – at times running the risk of striking a dissonance with the original libretto – have the impact of flipping the opera and making a strong case for the ongoing issues that millions of women around the world face today.

Finally, Kent’s production shows that opera is a living art form that not only can but also must connect and communicate with the modern world and its problems. Stirring away from fossilized, sterilized, and idealized views of what classical opera is or should be, Kent introduces a fresh air of life to the art form, aiming perhaps to bring back one of its key features during its heyday as high art not merely enjoyed by a secluded elite but rather appreciated by all. It’s also worth adding that the singing was magnificent, both powerful and lucid: Sondra Radvanovsky and Aleksandrs Antonenko were astonishingly good on their own, and even better together. Antonio Pappano’s conducting was exemplary, by turns energetic, tactful, and mischievous.

A rewarding and enriching experience, emblematic of the uniqueness of the Ertegun experience.