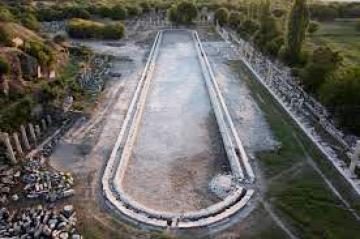 Throughout the academic year the Ertegun programme organises project talks given by academics within the humanities division, where the scholars have the opportunity to hear about current research conducted in a variety of fields.  Such talks offer a terrific insight into the activities of some of the foremost academics in Oxford, and allow the Ertegun scholars to gain insight into a variety of different disciplines and some of the most recent and exciting research being carried out within them.

On 6 June the scholars gathered in the seminar room of Ertegun House to hear a talk by Professor Bert Smith and Dr Joshua Thomas on the topic of the recent excavations at Aphrodisias, a city in south-west Turkey which began to flourish under Roman rule in the second century BC, and remained important until the seventh century AD, when it was badly damaged by a major earthquake. The importance of the city was officially recognised in 2017, when Aphrodisias was officially inscribed as a UNESCO world heritage site. Professor Smith is the Lincoln Professor of Classical Archaeology and has been Director of Excavations at Aphrodisias since 1991; Dr Thomas has been involved in the Aphrodisias project since he was a PhD student, and now holds the position of Lavrey-Shuffrey Early Career Fellow in Roman Art and Archaeology at Lincoln College.

The Aphrodisias project is largely a collaboration between Oxford and NYU, and is wide ranging in the scope of its investigations. During this talk, Professor Smith focussed on one of the most exciting new developments in the project: the excavation of the South Agora Pool. This monumental water feature, some 170m long and 30m wide, dates as early as the first century BC. Flanked in antiquity by a colonnade of palm trees, the pool would have been one of the most visually stunning elements of the city, and represented a huge financial investment from the local government into the aesthetic infrastructure of the city, demonstrating its wealth and status as both a cultural and administrative centre of the province. The excavation of the pool was completed in 2017, and yielded numerous important finds. A variety of sculptural elements – including some remarkable portrait heads – from Aphrodisias’ famous marble sculpture workshops were found; Professor Smith discussed these in detail, highlighting some fascinating features including covert Christian symbols added by artists as a sign of piety in a time when Christianity was not accepted as a religion in the province. The Aphrodisias pool made an especially suitable subject for an event at Ertegun House, given that the excavations have been funded by Mrs Ertegun as the Mica and Ahmet Ertegun South Agora Pool Project, reminding us that Mica Ertegun’s philanthropic interests extend beyond the Ertegun Graduate Scholarship programme to support for research and art, as well.

Professor Smith then handed over to Dr Thomas, who discussed his role in the Aphrodisias project which began when he was a PhD student and continues to the present. Dr Thomas has been heavily involved in the recording of the marble sculptural elements from Aphrodisias, particularly from the area of the South Agora. Dr Thomas also discussed his work on the reconstruction and interpretation of the Agora Gate, a monumental, two-storey columnar façade which originally displayed numerous portrait statues of emperors and local benefactors.

Much was learned by archaeologists and non-archaeologists alike, with a good deal of lively discussion and debate during the Q&A session, after which the scholars joined the speakers and Ertegun Director Professor Edmund Herzig for dinner at a nearby restaurant where the conversation continued.