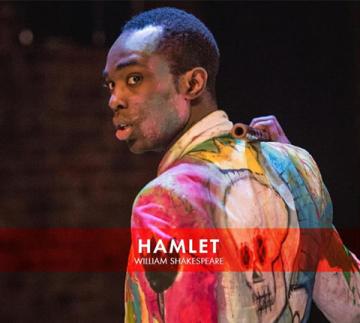 Bulletproof screens, aviator sunglasses, loud music (recorded and live), and military uniforms: you wouldn’t have guessed that this was Hamlet, but, as a group of Ertegun scholars discovered in Stratford-upon-Avon last month, it most certainly was.

The RSC’s new production of Hamlet takes the play out of Denmark and straight into the heart of West Africa, where Shakespeare’s now close-to-clichéd tale of greedy uncles and treacherous mothers takes on new life as a chronicle of the region’s politics. Dictators rise and fall in this production; sometimes they make it on to the cover of TIME magazine. Hamlet, of course, quips, complains, and can’t make up his mind about anything, all while wearing a white t-shirt splashed with paint: a professional hazard if you’re a “crafty” graffiti artist.

The Africanisation of Hamlet, while surprising to many, was not entirely out of place. What may not have been immediately perceivable to a British audience was such an adaptation of Shakespeare’s play points to the complex trajectory of the Bard’s work outside the Anglophone world. Fewer may know that the study of “Eng. Lit” as we know it—with Shakespeare and Milton as its cultural figureheads—was developed as a tool of cultural control (aka a “liberal arts education”) in early nineteenth-century India, where it was meant to create, in the infamous words of the bureaucrat, Thomas Macaulay, a class of go-betweens, men “Indian in blood and colour, but English in taste, in opinions, in morals, and in intellect.” The model quickly spread to other parts of the British colonial world and it would be unsurprising to discover that at a certain point in history, more people read Shakespeare’s plays in classrooms in Lagos, Accra, and Calcutta, than in London or Oxford. In later years, this came hand in hand with the phenomenon of rewriting—as a means of both reclaiming and exposing this colonial project—and produced works like the Sudanese writer Tayeb Salih’s Othello novel, Season of Migration to the North, and Wole Soyinka’s A Dance of the Forests (dubbed a sort of “African Midsummer Night’s Dream”). Hamlet in Ghana is therefore less unusual than we might otherwise think.

Like Julius Caesar, which the RSC also remade in a similar vein in 2012, Hamlet is easily adapted to the West African context. The central characters of the play look surprisingly well in their new garb: the bureaucrat Polonius sweltering in his uncomfortable suit, the new leader Claudius in his Madiba shirt, the fickle mother Gertrude in her European-bought fashionable dresses. Hamlet and Laertes are both afforded the luxuries of belonging to the dominant classes in the Third World, not least, an expensive education abroad. And if you were worried that the intoxicating beating of drums, the puffs of smoke that accompanied Hamlet’s almost shaman-like father’s ghost, and the accented speech of the night guards could lead the play down a well-trodden and dangerous path—of rehearsing both exotic and corrupt stereotypes about Africa—the production’s marvellously self-reflexive response to this are the characters of Rosencrantz and Guildenstern, Hamlet’s friends from his time at university in Wittenberg, who come to visit their foreign friend armed with good intentions and gifts from their corner Cool Britannia store.

Cultural critique aside, the visit to Stratford-upon-Avon had all the trappings of typical Ertegun House trips as I have known them since I arrived at 37A St Giles’ in 2012.  Scholars were worried that they would board the wrong train (not an unlikely or infrequent occurrence), it rained incessantly and there were not enough umbrellas (there never are),  we didn’t slot enough time for our luxurious two-course pub lunch and then were later witnessed hurtling down the road to reach the theatre on time (which of course, we did). None of us would have it any other way.