The Oxford Philharmonic Orchestra and Long Yu at the Sheldonian Theatre 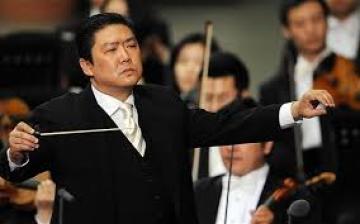 The Oxford Philharmonic Orchestra, under the baton of Long Yu, began their performance with a festive and energetic rendition of Huanzhi’s Spring Festival Overture, which according to the programme was inspired by singing and dancing celebrations witnessed by the composer – and according to a fellow scholar was evocative of a puppy that has heard the word “Walk”! The playful excitement of the opening and finale were complemented by a gentler central section that began with an oboe solo, apparently based on the North Shaanxi seedling dance (lingchang yangge diao). The only drawback to the piece as a whole was the unfortunate placing of our seats just above the (rather extended) percussion section – which did mean that now and again the enthusiasm of the cymbalist drowned out the rest of the orchestra.

There was a marked contrast with the second work, Bruch’s first concerto for violin. This famous piece was played by Vera Tsu, whose performance was both dramatic and lyrical, from the first entry of the haunting opening. The rondo-like finale brought the first half to a spectacular finish.
After a short interval came a flawless rendition of Dvořák’s eighth symphony, long one of my personal favourites. The many melodies were passed from instrument to instrument, the bird-song-like flute motifs appearing again as more serious themes in the strings, before being taken over by the brass for moments of dramatic clarity. The orchestration of this symphony is simply superb, and the orchestra in question managed to convey the sensation of dialogue and conversation that makes this such a complex, and glorious work.
We left the Sheldonian with a sense of elation and inspiration, very grateful for the opportunity to see a world-class orchestra in such a historic venue.
Ursula Westwood