Oxford Maqam’s ‘Acoustic Maps’ : Place and the Female Voice in Egypt’s Musical Past 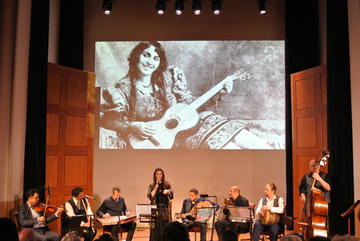 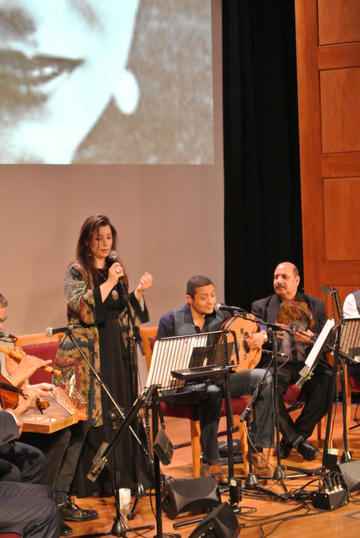 In Arabic the word ‘maqam’ means place or location, and, as I write this from my Ertegun desk, Oxford Maqam is in a place I know all too well. With a homesick smile, I imagine Yara – a fellow Ertegun scholar, phenomenal musician and friend – and her band-mates driving the open road between Canberra, Sydney and Melbourne, sitting under eucalyptus trees, and playing to audiences with easy Australian accents and attentive ears. The logistics of covering the Australian coastline as a nine-piece ensemble with a double bass, oud, violin, ney (Middle Eastern flute), and the percussive instruments the djembe drum and the riqq, is impressive. Yet, what really strikes me about this trip is how Oxford Maqam’s innovative approach to a classical Arabic music continues to travel geographically and connect diverse audiences to the sounds of the Arab and Middle Eastern world. When the Ertegun scholars saw OM perform live in Oxford, such was the vividness of their traditional ‘takht’ (chamber ensemble) songs and Egyptian ‘big band’ tunes, that I left the Magdalen Theatre and imagined places I’ve never been before; a Levantine desert under an expanse of night sky and a smoky Cairo bar in the 1920s, frenetic and joyous.

In their Oxford performance, Oxford Maqam led its audience to moments in Egyptian musical history, creating ‘acoustic maps’ to navigate the Eastern Mediterranean and Arab world. The opening half played through a set of 18th century Egyptian songs and combined Middle-Eastern vocal harmonies with weaving instrumental sections. I remember how the sound of the ney – a traditional and ancient wooden flute - swept through the other instruments like a warm wind while the oud and violin sang the melody. The djembe drum developed the tempo slowly until the whole theatre seemed on the point of movement. There was a strange tension between how the Middle Eastern repertoire invited dancing, and the constraints of the Magdalen Theatre as a venue designed for public lectures pushed the audience into a different kind of listening. The dynamism of nine musicians playing together on stage vividly demonstrated how this was a living musical history.

The second half of the performance centred around show tunes from the 1920s onwards. Behind the band, fabulous sepia photographs flashed on screen of popular music figures in early twentieth-century Egypt, writing and performing songs for Egyptian cinema, stage and radio. One of the most intriguing figures was Mounira El-Mahdeya (1885-1965), an Egyptian singer and later entrepreneur. As a women’s studies student, a special aspect of the performance was hearing the female voice (Yara’s vocals) richly ornamented with a texture I hadn’t heard before. As Yara sang the songs of Mounira El-Mahdeya, I realised the extent to which her voice was instrumental in the music, but also personal. What makes the Ertegun community a special place for humanities study is the overlap between scholarship and life when a scholar’s passion weaves their scholarship with experience and often leads to creative insight. Yara’s work on the female voice in Egyptian music and the significance of women like Mounira El-Mahdeya, is one such creative collision. As I listened to Oxford Maqam, I was struck by the sense that Yara was involved in her subject through writing, and more magically through continuing to make the female voice come alive in Egypt’s musical past; in Oxford, Egypt and now Australia. Here, place and history travel through the musical encounters between audience and performer, sealed with the invitation to leave one’s seat, dance and enjoy.