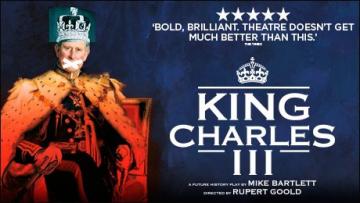 On Monday the 22nd of February, a group of Ertegun scholars descended upon the Oxford Playhouse to witness Mike Bartlett’s ‘future history play’, King Charles III. Given that the play in question is a winner of the Olivier Award, has been touted as the ‘play of the year’ by several prominent publications and was directed by the Almeida Theatre’s pioneering artistic director Rupert Goold, my expectations were, reasonably, rather high. And for the most part, they were met.

The play is doubly audacious. In premise – it begins with the funeral of the present monarch and the expectation that her son Charles will finally ascend to the throne; and in mode – blank verse, soliloquies, rhyming couplets, plot devices, allusions and embedded quotations that are unabashedly and unmistakably Shakespearean. Charles himself invokes Hamlet (as well as T. S. Eliot’s desolate and perplexed Prufrock), Richard II and Lear; Diana appears as an ambiguously prophesying spectre, evoking both the ghost of Old Hamlet and the witches of Macbeth; Kate Middleton, perhaps most interestingly, is both winningly feminist and yet cunningly ambitious in the style of Lady Macbeth. Intertwining plots are propelled by crises both constitutional and existential, tensions arise as individual consciences confront realpolitik. Prince Harry—a bit of a Prince Hal—was one of my favourite characters. Disenchanted, bumblingly posh and the butt of many a joke, he substitutes a Falstaff figure with the sharp, socialist art student, Jess. Although the drama gained more interest and intensity by the end of Act I and sustained it through most of Act II, the ending was for some, a disappointment. It closes with a fitting answer to the opening, a coronation to match a funeral. It is of course William, rather than his father who is crowned. Perhaps it was the tragic inevitability of this event, or the fact that Charles was betrayed severally by family and staff, or the fact that Harry reneged on his promises to Jess that made the sumptuous scene fall flat. And yet this peculiar combination of pathos and derision, of dissatisfaction, is in many ways very Shakespearean. I do think that a different conclusion that did manage to tie up all the loose ends of motive and meaning would have robbed the play of its power.
King Charles III did generate a few criticisms grounded in fact and likelihood – Charles, for example, referred to himself as the ‘anointed king’ before his coronation which is technically incorrect. Yet the reference did (if erroneously) powerfully convey the protagonist’s deeply felt birthright to the throne. Others found the idea that the real Prince of Wales might block a parliamentary bill within a few weeks of his mother’s death quite ludicrous. But then, I would argue, Prince William’s ceaseless eloquence was equally, if not more absurd. All this aside, the drama is an ambitious and ingenious imaginative act, one that raises some disquieting questions that prompt meditation. I would definitely recommend it.
Namratha Rao