Ertegun House, with the support of Brasenose College, presented the solo exhibition Garden of Rasa on November 1st, 2019, showcasing recent paintings and drawings by Han Mengyun, a contemporary Chinese artist based in London. The exhibition was organised and curated by Linqing Zhu, a resident alumna of the Ertegun Scholarship Programme.

This painting project playfully interweaves a variety of painting traditions, most notably the Chinese, Indian and Persian, and their associative styles, iconography and mediums, reflecting on how formal textuality and the pictorial, abstraction and narration, interrelate through acts of poetic composition. Confronting the challenges of responding to, and reinterpreting, traditional art forms as a female artist that is excluded by the normative history of art, Han endeavours to explore her relationship with the art of the past through a practice that enables a confluence of artistic languages of different traditions to reveal the most universal human emotions and expressions in the seemingly most disparate cultural entities. Through collecting and re-enacting fragmented histories and lived experiences, Han’s work is a container of splintered time, from which her own history emerges.

The opening of the exhibition started with a conversation between the artist and the curator, revolving around the artist’s relationship with traditions of painting similar to that of lovers because of the impossibility of becoming a literati painter and her love for a tradition that she does not belong to. Only in a lover’s relationship can Han embrace a tradition while maintaining her independence. The discussion was then followed by a comparison between various forms of painting in history and how the artist managed to reconcile the differences in her painting practice. Having studied Sanskrit and Indian aesthetics, Han was intrigued by the mythologies associated with the divine origin of painting in Citralakṣaṇa of Nagnajit, in which the first painting came into being in the world because of a father’s longing for his deceased son. What Han learned from this myth is that “Painting is longing. When you paint someone, you want that person back.” The primal incentive to paint is derived from the longing for the absent, as exemplified by paintings in history, such as the Chinese literati painting for his departing friend, a distressed Abhisarika Nayika on the way to a tryst in Indian miniatures, or a lady or a youth in Persian miniatures awaiting the person to whom the flower in their hand is dedicated. These universal emotions represented in art and poetry are what prompted Han Mengyun to forge a vocabulary for her painting that speaks to humanity of all times and across cultures.

Han Mengyun (b.1989, Wuhan, China), currently lives and works in London. Her website is at www.phalada.com

After graduating from Bard College with a degree in Studio Art in 2012, Han explored painterly representations of Eastern aesthetics and sensibilities with the Abstract Expressionist language that marks the artistic influence that she underwent in the US. Her quest for a deeper understanding of Eastern philosophies prompted her to study Sanskrit at Kyoto University in Japan in 2015 and she continued her research and artistic practice at Ruskin School of Art, University of Oxford, where she received her MFA degree in 2018. The study of ancient languages, thoughts and art have contributed to the drastic change of Han’s paintings from abstraction back to representation, from the dichotomy between the East and the West to seeing the world in global connections and communications, in which styles and motifs in transit attest to the nature of hybridity in all forms of art and the task of an artist is that of a translator. 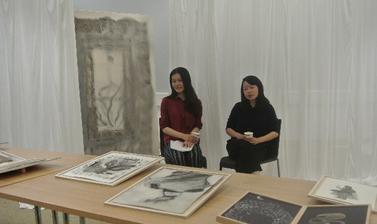