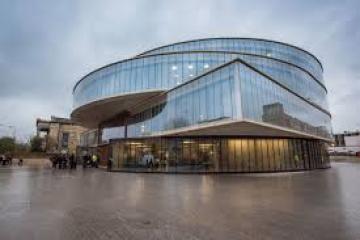 The enormous stack of glass and concrete discs newly landed on Walton Street cannot fail to inspire curiosity in the passer-by. I myself had for weeks been wondering, while wandering, what happens (and what it looks like) inside. On 15th February, my curiosity was satisfied, when the Ertegun scholars were taken on a tour of the new home of the Blavatnik School of Government.

The scholars were welcomed by Professor Ngaire Woods, Founding Dean of the BSG, and member of the Board of Overseers for the Ertegun programme. As Professor Woods explained, the aim of the School is to promote better governance in all parts of the world through teaching and research in public policy, and concrete engagement with governments and leaders. The School, as well as the building, is new in Oxford, having been founded in 2010. Professor Woods stressed the harmony between the design of the building and its function – the open space and visibility intended to foster communication, in contrast to the focus on solitude typical of more traditional work-spaces in Oxford.

The Facilities Manager, Sally-Ann Lyon, led the tour. The building is the brainchild of Herzog & de Meuron (also known for the Beijing Bird’s Nest and Tate Modern), and had been in the pipeline since the School’s founding. It was especially good to hear from Sally how highly accessibility and sustainability had been prioritised in the design. The building itself is a striking, sleek, light, oak-concrete-glass space comprised of five ring-shaped floors, each obtruding into the huge central atrium which looms before one, quite spectacularly, upon entering. Each floor’s slightly off-centre placing creates a subtle but dazzling spiral effect, especially from above – something like a minimalist, asymmetrical Spirograph. On the sunken, lower floor, a thick, squat concrete staircase twists down from a mezzanine; another spiral staircase, in contrast, spans almost the whole height of the building, and affords an extremely pleasing view from the bottom – up the hollow of the helter-skelter to a simple circular skylight. Alongside the elegance of the shape, there is a refreshing austerity in the building’s production, with rough patches in the concrete walls revealing the position of the steel skeleton within. And the view out to Port Meadow from the fourth-floor terrace is undoubtedly the best I’ve come across in Oxford.

We ended the tour from the gallery above the entrance, looking out onto Walton Street (through, we were told, the largest piece of double-glazed glass in a structure in Europe). It felt a privilege to be looking out with knowledge after looking in with curiosity – a privilege to have been introduced to what is clearly the perfect incubator for the crucial work the BSG is committed to.