On Monday 23 October, as part of our 5-Year celebration of the Programme, we held the first Ertegun Alumni event in Oxford.  It was a wonderful occasion, with twenty-six Alumni present, including two who had travelled from the States and four from the Continent.  A highlight of the occasion was the presence of ten of the original fifteen 'Foundation Scholars' (the other five are all abroad), a happy reminder of a day back in October 2012 when the Programme was officially launched, and an even happier testimony to the affection in which it is held.

At the event, four Alumni talked to their colleagues, the present Scholars and the Ertegun Board about their experiences in Oxford, their very diverse subsequent career trajectories, and the continuing importance in their lives of the Ertegun experience, as well as of contacts and friendships made in Ertegun House: Priyasha Mukhopadhyay, now a Junior Fellow of the Harvard University Society of Fellows; Charlie Draper, software engineer and theremin player; Jason Bell, doctoral student at Yale; and Rivkah Brown, policy advisor on Creative Industries in Whitehall.  But the most important moment of the event was the presentation to Mica Ertegun by Tobias Tan (a witness to all five of the Programme's opening years) of a 'Thank You' book, for which all sixty Alumni had provided a photograph and a personal message of thanks. 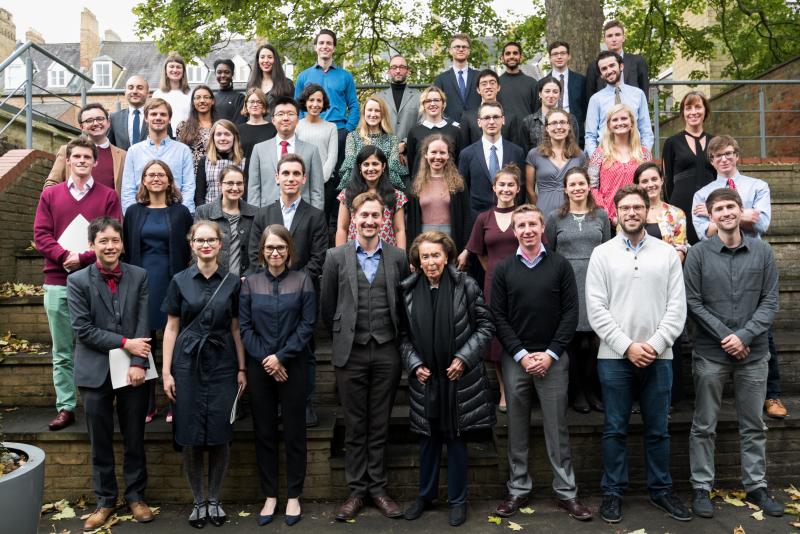 The late autumn weather was kind to us, allowing us to close this happy event with a photograph of Mica surrounded by her Scholars, past and present.

The Alumni event was followed by a larger gathering where we were joined by the Oxford great and good and invited guests. After the Vice Chancellor, Professor Louise Richardson, had thanked Mrs Ertegun for her generosity and vision, and commended the achievements of the first five years of the  Ertegun Graduate Scholarship Programme, Bryan Ward-Perkins, the first Ertegun Director, introduced Professor Antonia Moropoulou of the National Technical University of Athens. She paid tribute to Mica Ertegun’s vital role in the project, generously contributing the lead donation to the project and working tirelessly to bring the church communities together to support it. This generous donation enabled the Church to begin the restoration project after over a century of inactivity and the project was completed successfully in 2017.  Mrs Ertegun was honoured with the award of the Medal of the Holy Sepulchre by the Patriarch of Jerusalem.

Professor Moropoulou gave a fascinating talk, richly illustrated with slides, which took the audience through the extraordinary story of the recently-completed restoration of the Aedicule of the Church of the Holy Sepulchre in Jerusalem. Professor Moropoulou explained how she and her team had met the challenges of working on a site of such immense spiritual significance, and how the project had succeeded in bringing together the Greek Orthodox, Roman Catholic and Armenian churches that share responsibility for the site, while maintaining access to pilgrims and providing reassurance to local communities.

After the lecture, guests enjoyed a reception at Ertegun House before a smaller group went on to a dinner at the Ashmolean Museum, hosted by the Chancellor of the University, Lord Patten of Barnes, while the Ertegun Scholars and Alumni went off to enjoy themselves at a nearby Oxford hostelry. It was a splendid and happy occasion, very much enjoyed by all.