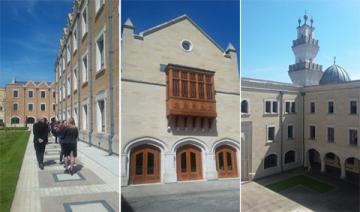 On Thursday 5th May, driven to suburban Oxford by an unheard call to prayer and an overt curiosity, more than a dozen Ertegun scholars had the unique opportunity to visit the brand-new building of the Oxford Centre for Islamic Studies (OCIS) on Marston road. We were met in an open courtyard by the Director, Dr. Farhan Ahmad Nizami CBE who is also the ‘Prince of Wales Fellow in the study of the Islamic World’ at Magdalen College and an Emeritus Fellow of St Cross College. Our first and immediate reaction was that we had stepped outside of Medieval Oxford and into a North African or Middle-Eastern mosque. The OCIS is limited by walls and fences, similar to a temenos wall delineating the sacred space of a mosque. A minaret and a high dome signal the space dedicated to prayer, in this case a large mosque built solely of stone, wood, and brick. The mihrab is adorned with muqarnas, and the soft carpet against bare feet recalls the touch of Istanbul, Cairo, and Bagdad. As typical of an Islamic palace or mosque complex, the Centre has several courtyards surrounding a sahn and riwaq (central courtyard and arcaded peristyle), most adorned with a water feature and gardens.

Every architectural or decorative element of OCIS was carefully planned to represent the Islamic world and all its diversity. In fact, benefactors from many Muslim-majority countries financed different parts of the building, and their regional artistic influences can be attested by the name of each space: the King Fahd Quad, the Oman Hall, the Istanbul Courtyard, and the Moroccan Room which will host the office of the Director. Every flight of stairs is decorated by beautiful Iznik tiles, and the entrance hall houses not only a gigantic portion of the original kiswa, but also a rare section of the cloth that covers Prophet Mohammed’s tomb. Interestingly, the new building brings into a single harmony the Oxford and Islamic architectural traditions as evidenced by the design of quadrangles, arches and domes. Throughout the visit, we could see evident parallels between the architecture of some famous colleges and the specificities of Islamic art. This inter-civilizational dialogue is certainly one of the fundamental features of the Centre and works beyond architecture as a metaphor of Oxonian intercultural identity.

Even though the Islamic Centre is not an official college of the University, in many respects it will function as one, working in coordination with other colleges. The centre will offers accommodation to more than a dozen students and scholars, provide meals in a colonnaded dining hall, and house an enormous auditorium faced with traditionally crafted wood panels imported from Malaysia, providing the name of “The Malaysia Auditorium”, for major lectures and conferences. Besides, the centre offers a well-stocked and open-access library with more than forty individual desks. We were particularly impressed by the size and the peacefulness of the library which provides an extremely comfortable space for work. The Centre prides itself in the title of “independent” and it is in fact open to all students and academics of any religious denomination. It offers serene places for reflection, prayer, and study, and is true to Islam’s quest for beauty and knowledge.

Our visit culminated on the roof of the building from which we could enjoy the view on the inner garden and the sport grounds of nearby colleges. We ended our visit in the exhibition space where we could learn a bit more about the history and the aims of the Centre, notably that it provides “a meeting-point between the Islamic and Western worlds of learning” and “encourages better understanding, tolerance and friendship between different people and cultures” through various activities including teaching, research and international academic cooperation. We were particularly delighted to learn that the Patron of the Centre is HRH the Prince of Wales, which certainly gives further prestige to the OCIS. Current research projects run by the Centre are particularly diverse and relate to social, financial and environmental topics. Similarly, Centre fellows teach a wide range of disciplines including Politics & International Relations, Economics, Oriental Studies, Modern History and Theology. OCIS offers a series of fellowships and its members are associated with various Oxford colleges.

The new building of the OCIS is not only a genuine addition to the world-famous architecture and skyline of Oxford, but also an important landmark that embodies the values of intercultural dialogue and sharing. One month before the start of Ramadan, the holy ninth month of the Islamic calendar in which Muslims observe fasting, this visit by Ertegun Scholars was extremely instructive and highly symbolic. As we all seek, as Ertegun scholars, to enlarge our knowledge, extend our vision and exchange our ideas beyond cultural borders, this visit has certainly provided us with a further opportunity to put into practice the mission of the Ertegun Scholarship Programme!