Mapping the Soundscape of Ertegun House 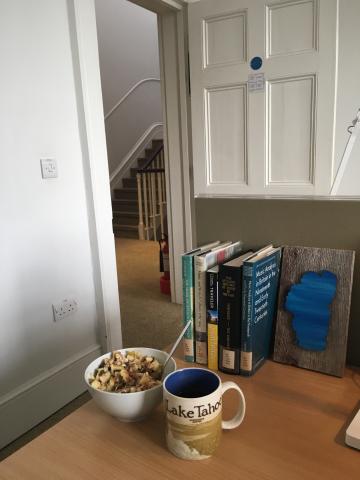 Many scholars in the house erroneously claim that they have the best desk.  It is a shame – I just don’t have the heart to tell them that they are sadly mistaken, because my desk is indisputably the best work space in the house.

I have a committed love affair with this perfectly-situated desk, which often means that I am one of the first scholars to arrive in the mornings.  I am not naturally an early riser (and surely my flatmates resent my early-morning alarms), but watching the sunrise over St. John’s college from my office window – serenaded by BBC Radio 3 and accompanied by my trusty bowl of muesli – has become a cherished morning ritual.  After seeking assurance that a new day has in fact dawned, I turn to my ongoing extracurricular research project of mapping the soundscape of Ertegun House.

After months of accumulating data and testing hypotheses, I can identify most sounds from St. Giles’ street that manage to infiltrate our glorious Georgian windows (even down to the hollow ‘ba-DUMP’ the uneven sidewalk stone emanates when tardy students are rushing to their tutorials). The latest training regime I’ve devised for my ear is to identify fellow scholars by the sound of their footsteps coming up the stairs.  Michele was my first match – he ascends in a flurry of staccato steps that reflect his ebullient personality.  Frazer’s heavy, deliberate footfalls and lack of laboured breathing distinguish him from less-active scholars like myself who puff up the first flight.  Syncopated and spritely beats indicate that Cassie has just come back from an afternoon jog, while a steady clacking of heels from above suggests that Ursula is coming down for a cup of tea.  Steps that proceed slowly, pause, and then resume usually reveal themselves to be Max engrossed in a book or Vanda admiring the artwork adorning the walls.

Still perched on my first-floor lookout, I can tune my ears to the commotion arising in the kitchen as well – outbursts of laughter often compete with the rising pitch of the kettle.  While linguistic limitations prevent my eavesdropping on the many international phone conversations, I can nonetheless revel in the musicality of Kaoutar’s voice or Wen-Pin’s excitement when he calls his children.  I have also been privy to plenty of weather reports, concert reviews, translation consultations, and weekend plans from strains of dialog that float in from the landing.

While the occasional deadline demands that I close the door and submerge myself in my work, I still find the flutter of activity in the Ertegun house more stimulating than distracting.  The environment has been thoughtfully conceived on every level to provide us scholars the best workplace a post-grad student could want.  While our olfactory, gustatory, visual needs for an inspiring space are satiated by the constant brewing of coffee and Mica’s expert eye for interior design, the equally-important auditory element is supplied by the scholars’ thoughtful queries, encouraging affirmations, and even their energised footsteps.  How lucky am I not only to have a desk all to myself (which I still maintain is the best in the house), but also to have such a lively community right outside my office door?