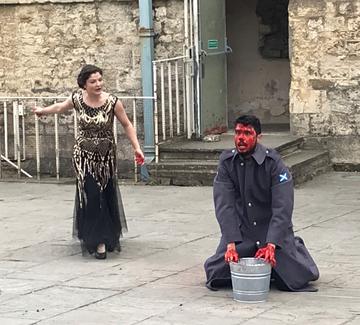 “Out, out, brief candle!

Life's but a walking shadow, a poor player

That struts and frets his hour upon the stage

And then is heard no more …”

“What has Scotland to do with Jerusalem?” This riff on Tertullian’s old question ran through my mind as I was watching the Tomahawk Theatre’s presentation of Macbeth (part of the 2019 Oxford Shakespeare Festival). After all, I had just completed that very morning my final exam on the New Testament, and here I was, celebrating with my fellow Ertegun scholars in the open-air courtyard of Oxford Castle, dining on strawberries and cream and Prosecco, watching royal treason set in Scotland.

Yet, watching Macbeth was appropriate for celebrating the completion of my course, not least because my interest in literature was awakened when I first encountered Macbeth way back when I was fifteen. As the actors of Tomahawk Theatre rattled off those familiar lines (“Tomorrow, and tomorrow, and tomorrow, Creeps in this petty pace from day to day”; “Out, damned spot! Out, I say!”; “Double, double, toil and trouble”), I was transported back to those early halcyon days of my youth where I first learned what “poetic meter” was, what “foreshadowing” meant, and how gender-play was a thing even back in Shakespearean times (Lady Macbeth: “Come you spirits, that tend on mortal thoughts, unsex me here, and fill me from the crown to the toe topful of direst cruelty!”). Those days were the beginning of a journey that led me far afield into the literary study of Christian Scripture, into the analysis of the surprising beauty of the Hebrew Psalter, and then into this year in Oxford, studying the artful sensory construction of Luke’s Gospel under the generous largess of the Ertegun scholarship. In that regard then, Scotland has everything to do with Jerusalem.

The backdrop of Oxford Castle was perfectly suited for the play, especially for those scenes set within Macbeth’s own castle at Inverness. Starting in the early evening, the play strode on as the summer sun set, allowing the encroaching darkness to mirror Macbeth’s descent into tragedy, lured by the slipperiness of ambiguous prophecy, but even more so by his own foolish ambition. Limited by a small company, each actor/actress took on multiple roles, which was understandable, though a little jarring, especially when King Duncan (Craig Findlay), freshly murdered, was resurrected as Macduff reporting on Duncan’s death. Lady Macbeth, played by Beth Burns, was portrayed convincingly, though the performance was let down somewhat by the lack of rapport with Macbeth (Ivo Gruev). However, all were agreed that the standout performance was that of the Porter, played by Martha Ibbotson to great hilarity. My teenage self would agree – the bawdy porter was always his favourite character! The Tomahawk company clearly did not take its production too seriously. This was amply clear when, in reply to the Porter’s words “Come in, equivocator!”, the sound system anachronistically blared out Theresa May’s voice declaring “Brexit means Brexit”.

All in all, it was a light-hearted way to bring Trinity term to an end, and a jovial capstone for the Shakespeare film series organised earlier in the term by our resident expert Rachael Hodge. It was a reminder of the fabulous nature of the Ertegun programme: a scholar-initiated event, bringing together postgraduates studying in disciplines across the Humanities, to enjoy one of the great classic plays. “So, thanks to all at once and to each one, Whom we invite to see us crown'd at Scone.”