Live-screening of Macbeth at The National Theatre 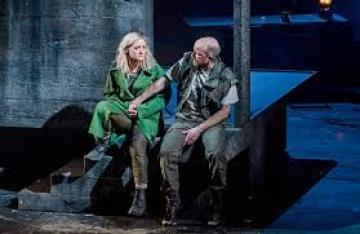 First, a disclaimer: I’m no director. But it’s always seemed to me that it should be impossible to deliver a bad production of Macbeth. As it survives in the 1623 First Folio, Macbeth is a pacy psychological thriller, a tightly wrought drama of political intrigue and domestic strife bristling with supernatural possibilities. It’s exciting, claustrophobic, edge-of-your-seat stuff. You could cut the tension with an imaginary knife. And yet in the past few years I’ve witnessed two different Macbeths succeed in being, frankly, a little dull. The first was Justin Kurzel’s 2015 blockbuster film starring Michael Fassbender and Marion Cotillard as the murderous king and queen. The second, sadly, was Rufus Norris’s recent production for The National Theatre, with Rory Kinnear and Anne-Marie Duff taking on the lead roles. Though offering, on the face of it, very different interpretations, I suspect these two versions of the play ultimately suffer from the same basic errors. Kurzel’s Macbeth is an 11th century Scottish warlord who spends most of his time rampaging around battlefields in authentic early-medieval armour. Norris’s is a military leader in a (presumably) post-apocalyptic Scotland torn apart by resource scarcity and civil war; here, Macbeth’s makeshift breastplate is hastily gaffer-taped to his chest before a fight. In both interpretations, the play itself is overwhelmed by concept and visual expanse. In Norris’s production, Rae Smith’s mostly naturalistic set comprising a series of drab, cluttered war bunkers is dominated by a sweeping black ramp, which suggests space, not claustrophobic intensity.

It’s probably worth saying at this point that this is not a production which benefited from being live-screened. I’ve no doubt that the vast rotating set was impressive and, probably, unsettling in the theatre, but this was difficult to capture on a cinema screen. The performances also suffered in translation. The Olivier is an enormous theatre, and actors are forced to exaggerate in order to convey emotion to the back row. On camera, this inevitably looks like overacting, and so I can excuse Kinnear’s excessive quivering and whimpering in the aftermath of Duncan’s murder. Still, neither he nor Duff excels in this production, though both are undoubtedly excellent actors. Duff’s Lady Macbeth is movingly vulnerable, but lacks some of the menace demanded by the character’s chilling “unsex me here” speech in the opening act. Kinnear, meanwhile, plays Macbeth like a basically normal bloke who’d be more at home in a pub than in charge of a kingdom; for me, this didn’t really work, and I found myself wincing slightly as he plodded through some of the play’s more famous soliloquies: tomorrow, and tomorrow, and – well, you know the rest.

As for the witches, their scurrying, chattering and whooping seemed more silly than scary, at least from the comfort of a cinema seat. Despite big names and, no doubt, high production costs, this Macbeth unfortunately fell rather flat for me. Having said that, I know several in our party thoroughly enjoyed the production and share none of my criticisms, either of Norris’s vision for the play, or of Kinnear’s performance. A review full of sound and fury, then, perhaps not signifying all that much!