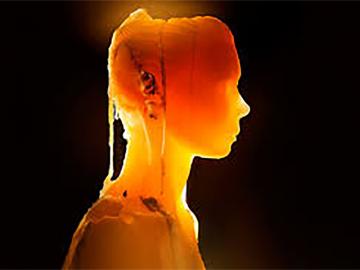 On February 14th, a group of Ertegun Scholars visited London’s Royal Opera House for the Royal Ballet’s final performance of Woolf Works: an evocative, award-winning triptych choreographed and directed by Resident Choreographer Wayne McGregor.  Offering interpretations of three of Virginia Woolf’s most famous writings the program’s three-part structure provides a simple framework within which the choreographer and dancers can showcase technical prowess, experimentation, and artistry within three different shows, each with its own plot, mood, staging, and choreographic style.

The first act, based on Mrs Dalloway, revels in traditional interpretations of Woolf’s writing, some of her most well-known subjects, and the time period in which she lived and wrote.  The costuming assertively represents 1920’s London; the staging features large, concrete-like frames through which the performers enter and exit their scenes, lending the setting an industrial, post-World War I austerity.  These frames were slowly rotated in the background or during changes in scene, offering elegant transitions while physically representing the interweaving of characters’ personal relationships and of present experience and memory in the plot.  The selection of Mrs Dalloway for the first act, combined with these stylized sets and costumes allows the director to deftly provide viewers with a satisfying, conventional balletic interpretation of classic Woolf within the first five minutes of the show.  Through the course of the first and into the later acts, the show departs from this traditional imagining of Woolf, and uses modern elements and unique choreography to capture the essence of the themes of her writing, repackaging those themes so that they resonate in a new way with a modern audience.  The choreography in Mrs Dalloway, while primarily classical ballet, is interlaced with influence from lyrical dance.   Lyrical, known for its effective portrayal of emotion, was primarily used in situations of nostalgic happiness, such as dances shared between the young Mrs Dalloway and her childhood friend, as well as scenes of dramatic turmoil, including Septimus’ episodes of post-traumatic stress.  This seamless inclusion of lyrical movement allows the emotionality of Woolf’s prose to shine through while demonstrating McGregor’s interest in evolution of classical choreography.

Where the choreography for Mrs Dalloway was classical but nontraditional, the choreography of the next act, Orlando, was a masterpiece of innovation within a classical style.  Less interested in plot than the first act, Orlando presents a bustling futuristic world, complete with all the usual markers of a science-fiction work: a laser show, strangely silhouetted, metallic costumes, and even unconventional items used for headpieces. These stylistic features amounted to a mere backdrop for incredibly fast-paced, bombastic, and technically difficult classical choreography.  The innovation matched with the dedication to classical technique observable in this act is likely what brought the show much critical acclaim, winning the Critics’ Circle Award for Best Classical Choreography in 2016.  Possibly drawing inspiration from Russian ballet, Orlando showcases acrobatic dance routines, highlighting pairs, soloists, and small groups in quick succession.  These flashing changes in focus between different groups of dancers resulted in the sensation that the viewer was observing a fiercely active society full of individuals facing different challenges.  While McGregor’s Mrs Dalloway integrated its set into the choreography Orlando’s backdrop of changing lasers was of a more separate nature—hardly interacting with the dancers at all.  The intriguing feature of the lasers were that they were frequently extremely low, sometimes shining just above the heads of the audience on the orchestra level.  Perhaps this was a choice designed to include the audience in the futuristic world set before them.

The ballet’s final act, Tuesday, was based on the novel The Waves, as well as several pieces of a more biographical nature.  After the pounding speed and power of Orlando, Tuesday’s tranquility, simplicity of staging and costume, and focus on a leading duo provides a sharp contrast.  With themes of aging, mortality, and pain, Tuesday relies on slow, controlled choreography, which, while technically simpler than Orlando’s, can be extremely difficult to perform in conjunction with a convincing emotional portrayal.  Faced with these challenges, Alessandra Ferri shines.  Named a principal dancer with the Royal Ballet in 1984, Ferri returns as a guest artist at age fifty three, to portray Woolf’s well-known female characters while reflecting aspects of the author herself.  In an interview with representatives from the Royal Opera House, Ferri discusses how her age allows her to portray Mrs Dalloway and Woolf in Tuesday with such tangible emotional connection.

After the wistfulness and tragedy of Mrs Dalloway, the time traveling romp that is Orlando, and Tuesday’s the reminder that all we’ve seen and experienced in the past two acts is fundamentally fleeting and mortal, the viewer leaves with a strong sense of the writings presented, as well as Woolf’s life and the concerns which inspired her work.  With a strong sense of Woolf’s life and writings, an inspired approach to choreography, and first-class principal dancers, McGregor honors Woolf’s life and writing with a performance reflecting and expanding upon her own blending of classic themes with innovative medium.