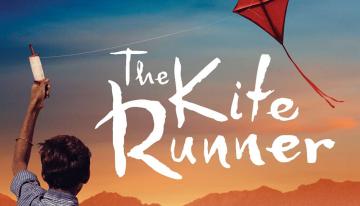 In a year of mostly highly successful cultural events, including some top theatre, The Kiterunner was the one dud. That is why the Director – who proposed it – is having to write this report on it himself! This is a play based on Khaled Hosseini’s best-selling first novel, which tells the story of two boyhood friends, who are also the sons of a Kabul household’s master and servant. They grow up together in Afghanistan during the tumultuous decades of the late 20th century, sharing happy moments flying kites together, but losing touch after the master’s son betrays the servant, leading to his family’s banishment from the household. As Afghanistan disintegrates through Soviet occupation, civil war and the rise of the Taliban, the young master gets out to start a new life in the USA, while the servant becomes the slave and abused victim of a Taliban commander, a predicament from which he is rescued by the master, parachuting in from California to whisk him away to safety in the USA. With strong themes of guilt and redemption, an autobiographical writing style, and convincing local colour, the book won many admirers and sold more than seven million copies, although it had its critics too, especially inside Afghanistan.

The play, however, seemed to keep and amplify the problematic elements of the book, while lacking its saving graces. A decent cast and production, with on-stage Afghan musicians, could not redeem a play that was dominated throughout by a powerful, but histrionic, central performance by the young master character. We were all heartily tired of his guilt trips and self-obsession by the interval, let alone the closing curtain. The servant character was played as a two-dimensional victim, utterly lacking in agency – think one of Dickens’s most virtuous and pathetic characters, Smike in Nicholas Nickleby perhaps, but without any of Dickens’s biting writing or social satire to salvage it – while the Taliban commander was almost comic in his villainy. Afghanistan itself was portrayed as a grim hell, with nothing whatever to redeem it. Escape to the West was the only path to salvation. We spent two hours feeling emotionally manipulated and aesthetically alienated and left the theatre with a sense of relief and escape.

You can’t win them all!