“Paris est magique”: A Journey to Modern Visual Art on the French Scene 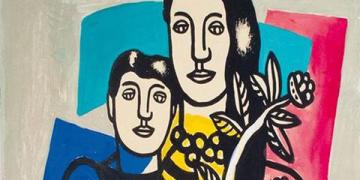 On Thursday 9th of February, Ertegun scholars were kindly invited to the opening of the spring exhibition “Degas to Picasso: Creating Modernism in France” as part of the private views organized at the Ashmolean Museum. As suggested by its title, this exhibition seeks to provide an overview of how modern visual art was developed and shaped on the French artistic scene through the significant contributions of leading artists and artistic movements. In the late 18th century, Paris became indeed the leading center for visual arts and attracted several aspiring creators from all over the world. The exhibition, which draws from the Ursula and R. Stanley Johnson Family Collection and spans over a century and a half of “progressive” art in France, features a wide and impressive range of works, including paintings, drawings, prints, etchings, and lithographs.

The journey proposed in this exhibition starts in the late 18th century with avant-garde artists breaking free from the ways art was taught at the French Academy, and turning, under the influence of Jacques-Louis David (1748-1825) and his pupil Jean-Auguste-Dominique Ingres (1780-1867), to a revolutionary focus on contemporary subjects rather than classical antiquity sources and Old Masters. Works displayed in this section include drawings by Jean Honoré Fragonard (1732-1806), battle scenes by Théodore Géricault (1791-1824), studies for bodies by Théodore Chassériau (1819-1856), as well as an astonishing “Encounter of the Moorish Horsemen” by Eugène Delacroix (1798-1863), inspired by his visit to Morocco in 1832.

In the first half of the 19th century, French revolutions of 1830 and 1848 encouraged a spirit of rebellion in the arts which lead to the increasing association of art and politics and the remarkable development of satirical works. Besides Jean-François Millet’s (1814-1875) depictions of nature and rural life, this section features a lithograph of the famous “Execution of Maximilian” by Edouard Manet (1832-1883), and an enjoyable series of political caricatures and satirical drawings by Honoré Daumier (1808-1879), including his hilarious “Ventre Législatif” (The Legislative Stomach) whose characters are based on real members of King Louis-Philippe’s government.

The following section explains how, in 1874, a group of artists, including Edgar Degas (1834-1917), Claude Monet (1840-1926), Camille Pissarro (1830-1903), and Auguste Renoir (1841-1919), reacted against the French Academy by joining their forces and organizing their own Salon. Initially an insult, the word “Impressionists” would become the label of a series of six exhibitions organized by the group until 1886. This section is particularly compelling as it bears witness to the various working methods used by impressionists, combining a wide set of techniques, colors, and perspectives, yet focusing on the common representation of modern and urban life. Interesting works in this section include Pissarro’s portrait of his eldest son Lucien and Degas’s scenes of women in the bath.

By the end of the 19th century, private galleries organized independent exhibitions, often accompanied with illustrated publications. The word “The Independents” is used to designate artists who turned their backs on the Academic Salon and went on to set up private shows in cafés and restaurants. One of those is Van Gogh (1853-1890), represented in the exhibition with a moving “Portrait of Dr Gachet”, the only etching he ever made in 1890, just before his death.

A few years later, another word, “Les Fauves” (Wild beasts), would characterize a group of artists who used harsh colors and rough techniques to add a provocative dimension to modern visual art. The group, which showed for the first time at the independent “Salon d’automne” of 1905, is associated with the works of Henri Matisse (1869-1954), Raoul Dufy (1877-1953), André Derain (1880-1954), and Georges Braque (1882-1963) among others. The latter’s encounter with Picasso (1881-1973) would pave the way for the emergence of the Cubist movement, known for its breaking with the tradition of one-point perspective representations. With its largest showing held in October 1912 at “Salon de la Section d’Or” (Salon of the Golden Section), named after the geometric ratio read by Jacques Villon (1875-1963) in Leonard da Vinci’s work, Cubism would become an influential movement, as cubist are works exhibited in New York in 1913 in an impressive display of progressive art. Besides Picasso’s rare sheets from his sketch books which offer an outstanding view of his drawing techniques, this section features Spanish painter Juan Gris’s (1887-1927) “The Guitar” and Jacques Villon’s studies for paintings of his younger brother Marcel Duchamp (1887-1968), known nowadays as the founder of Conceptual Art.

The final section of the exhibition focuses on the development of modernism after First World War as art continued to flourish on the Parisian scene. The effects of war, however, became increasingly visible, and works, haunted by the conflict, set out to develop a politicized interest in the lives of ordinary people and look back to explore the history of art. This section offers some striking works, including not only Fernand Léger’s (1881-1955) “Mother and Child”, used for the exhibition poster, but also “The Little Fish and the Fisherman” by Marc Chagall (1887-1985), Georges Rouault’s (1871-1958) first study of his 1913 masterpiece “Three Judges” held at the MoMA, Marcel Gromaire’s (1892-1971) expressionist scenes from the war front, and a “Portrait” of French writer Henry de Montherlant by Matisse. Furthermore, this section includes some of Picasso’s astonishing yet rapidly executed line drawings from the 1960s in which he revisits earlier masterpieces of modern art.

With more than a hundred works to discover, this journey through modern visual art demonstrates once again that France in general and Paris in particular have played a fundamental role in the development of avant-garde artistic experimentation and innovation. Stanley and Ursula Johnson, who lived in Paris in the fifties, have had the chance not only to gather an impressive collection of rare drawings and etchings but also to live within a vibrant scene that certainly continue to inspire, influence and shape the imaginary of modern artists all over the world. For, as Parisians would say, “Paris est magique”!