A visit to Bath 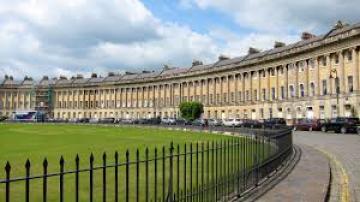 In Michaelmas Term, we went on an expedition to Bristol. As our train passed by Bath, the sun emerged from behind the clouds, and we gasped at the remarkable panorama of the old spa resort that unrolled in front of us. Soon it was settled: this would be the destination for another Ertegun trip.

We went to Bath a few days after the end of Hilary Term. Our first stop was a temporary exhibition at the Victoria Art Gallery, which several Ertegun scholars had already seen on a trip to Birmingham a couple of years ago; but it impressed them so much that we decided to see it again. It was “The Vanity of Small Differences”, a series of six large tapestries designed by Grayson Perry. Let me just add that I bought the exhibition catalogue and plan to use it to explain to my friends and family back home what the British class system is about!

Having discussed our impressions of the exhibition over lunch, we then went for a walk around the city to discover its lovely Georgian architecture. The two landmarks associated with Bath are the Circus and the Royal Crescent, designed by a father and a son – John Wood the Elder, and John Wood the Younger – in the second half of the eighteenth century. The beautiful stone façades and the rare oval shape of these townhouses are very impressive. Another architectural gem from about the same time is the Pulteney Bridge on the river Avon, which, unusually, is lined with shops on both sides. Bath Abbey, on the other hand, predates these three sights by several hundred years. It is a Gothic church which boasts a stunning fan vaulting ceiling, but what caught my attention were the two sculpted ladders that adorn its west front, with angels climbing to heaven – and even a few ones clumsily descending the ladder…

A tour of Bath would not be complete without a visit to the famous Roman baths. The hot springs in Bath were supposedly discovered before the Roman invasion; in his Historia Regum Britanniae, Geoffrey of Monmouth ascribed this discovery to Bladud, a legendary king of the Britons. The hot springs were then rediscovered by the Romans, who erected there an imposing complex of public baths and cult sites. Nowadays, the museum of the Roman ruins is housed in Georgian and Victorian buildings, erected when Bath became a popular spa resort in the eighteenth and nineteenth centuries. At the turn of the nineteenth century, Bath was in fact one of the largest cities in England.

We had a great time in Bath, and it was actually one of my favourite Ertegun outings so far. It made me want to reread a few of Jane Austen’s novels: she lived in Bath only for a few years, but the town definitely has a ‘Jane Austen feel’ about it!