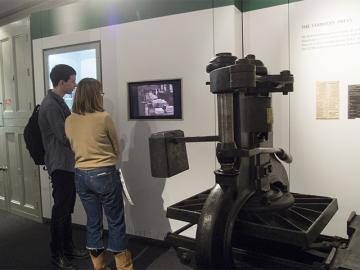 ‘We are going to the Oxford University Press Museum’: to what will it be devoted? To the history of book printing? To notable titles issued by OUP? To fine specimens of the art of pressing (flower presses, clothes presses, impressment gangs)? Though a preserved and fully operational impressment gang would have provided a more holistic learning experience than one typically sees in our modern museums, I am pleased to continue drawing my stipend from the Ertegun Programme and not the Royal Navy. I cannot yet write a washing-bill in Babylonic cuneiform; I am not ready for the higher things.

Some items (non-Babylonic) that impressed me:

Also, at the OUP Museum there is a printing press that the docent let us operate (sans ink). So you can press things at the Press Museum, but I think if you want results you have to actually submit a manuscript.

MORAL: Nobody will read your works if you haven’t written them.