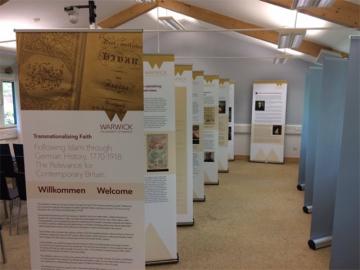 On the 13th and 14th of May, part of Ertegun House was transformed into a museum space, as we hosted the travelling exhibition ‘Transnationalizing Faith: Following Islam through German History’.

Starting in around 1770 and moving through to the end of the First World War in 1918, the exhibition takes its visitors on a journey through the first phase of modern German history to look at Islam through the eyes of the German-speaking world. During that time Germany went from being an idealistic notion to a nation state – indeed it became an Empire with colonial interests in Africa and Asia. Not surprisingly, the German vision of the Islamic world changed greatly, and was shaped by advances in learning, the increased movement of people and objects, and shifts in political, intellectual and cultural history. Germany’s evolving political and cultural relationship with the great Islamic empire of the Ottoman Turks played a central role throughout this period. The exhibition also considers the position of Islam in German-speaking Austria, which had borne the brunt of Ottoman aggression since the 16th century: later, though, Austria became a multicultural Empire, fused with Hungary and other states, and was also home to European Muslim citizens.

15 banners were set up in the annexe of Ertegun House, inviting the visitors to explore contrasting representations of Islam in Germany and Austria from these time periods, and encouraging them to make connections to the position of Islam in Germany and the UK today. Across different centuries and disciplines, the exhibition brings together a great variety of perspectives, looking at 19th century works of literature like Goethe’s West-östlicher Divan as well as contemporary interfaith architecture projects like the House of One in Berlin.

Presenting a broad range of cultural materials within the context of the socio-political developments of their time, visitors are prompted to consider critically how representations of  Islam and Muslims are shaped by societal circumstances and power relations. In an introductory talk accompanying the exhibition, its curator Dr. James Hodkinson from the University of Warwick, contextualised these examples from the German-speaking world within a wider theoretical framework and discussed how similarity and difference are negotiated at moments of intercultural encounter.

Part of Hodkinson’s Outreach project ‘Transnationalizing Faith’, the exhibition is not only aimed at an exclusively academic audience, but is pitched in such a way that it speaks to a broader public, prompting its visitors to relate the historic examples to their own experiences, understanding and perception of Islam and Muslims today. This drew a very diverse audience to Ertegun House, including academics and university students as well as a group of pupils from a local school and a great number of people who are currently not affiliated with an academic institution. The many positive responses we received over the course of the weekend illustrated that this broad range of visitors gained stimulating ideas from the exhibition and, reflecting their different backgrounds, took away various new insights.

This would simply not have been possible without the generous support of the Ertegun Scholarship Graduate Programme and the University of Warwick’s outreach project ‘Transnationalizing Faith’. I am deeply thankful for the resources and funding of both programmes, which permitted me to share my own research interest with the Oxford community through a wonderful exhibition, free and open to all. Special thanks goes to Dr James Hodkinson for designing this interesting and thought-provoking exhibition and for bringing it to Oxford University. Moreover, I want to thank the Ertegun House Director Rhodri Lewis and Administrator Jill Walker, who greatly supported me throughout the organisation of the event.