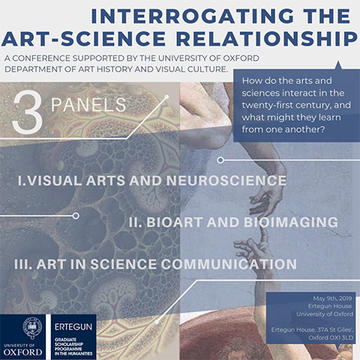 On 9 May 2019, during the second week of Trinity term, students from a wide cross-section of Oxford humanities and sciences faculties convened a conference at Ertegun House focusing on interactions between the arts and the sciences in the twenty-first century. In planning the conference, our goal was to bring in visual artists whose work is informed by scientific disciplines, and scientists who engage with artistic discourse. We were motivated by contemporary efforts to bridge this apparent disciplinary gulf, such as Dr. Eric Kandel’s decision, with the Columbia University Zuckerman Neuroscience Institute, to bring Jeff Koons in as their first artist-in-residence.

We developed three panels for the day’s speakers: Neuroscience and the Arts, BioArt and Bioimaging, and Art as Science Communication. Respectively, the panels were intended to address contemporary research in how the brain perceives art—and the function of art and aesthetic objects in our lives—from a neuroscientific perspective; the work of artists who use biological processes and bioimaging to make their art; and the role of art in scientific communication to non-academic audiences, such as in museum spaces.

One of the great successes of the day was the tremendous diversity of speakers. Some were quite obvious fits for their panels, such as Jane E. Raymond, Professor of Visual Cognition at the University of Birmingham, who spoke on the Neuroscience and the Arts panel. She delivered numerous insights regarding human visual perception of art, such as that our perception of everything we see—literally, how we see things, including dedicated “artworks”—is coloured by our typical visual environments and every prior visual experience we have had. She noted that “all art is contemporary,” since even if we are looking at a seventeenth-century Vermeer, we are looking with visual perception apparatuses molded by contemporary visual contexts rather than early modern Dutch ones.

Other panels, however, were composed of more “wild cards” who added greatly to the variety and breadth of insights of the conference as a whole. For instance, one of our Science Communication speakers was David Williams, a secondary teacher in Oxford who teaches A-Level chemistry and photography, and additionally is a stone carver/sculptor. He spoke about aesthetic beauty in in-class science experiments, and about the role of technical skill in both scientific and artistic work. Another science communicator was Stephen McGann, who plays Dr. Turner on hit BBC series Call the Midwife and also holds a master’s in Science Communication from Imperial College London. He spoke about the Season Five premier, which explored the thalidomide birth-defect crisis of the fifties and sixties, and addressed the ways in which contemporary adult thalidomide survivors responded to the episode.

Overall, the conference achieved its goals and then some, and had nearly fifty attendees. It brought together true leaders and interesting thinkers in varied fields, whose work proved diverse yet complementary and threw new light on one another’s fields and projects.