Power and Protection: Islamic Art and the Supernatural at the Ashmolean 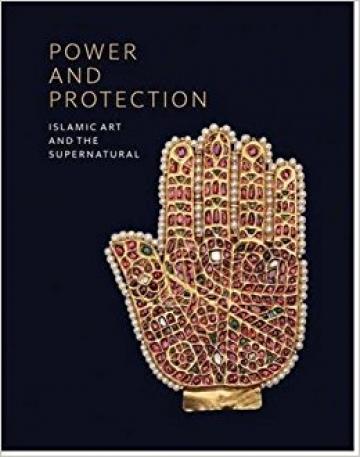 A delegation of Ertegun scholars headed to the Ashmolean on Friday 27th January for a handling session with artefacts from the exhibition Power and Protection: Islamic Art and the Supernatural. Most of use had already found time to explore the show, which addressed a range of material practices used in an Islamic context to ensure supernatural protection or to divine future events. Among the objects on display were Quranic manuscripts and collections of poetry used for bibliomancy, clothes and armour covered in protective verses and guides for the interpretation of dreams. These artefacts ranged in date from the twelfth century through to modern times, with a talisman written onto the reflective surface of a compact disk pithily demonstrating the contemporary relevance of these practices. A personal favourite was a manuscript giving instructions for the creation of an amulet to grant success in intellectual endeavours. This required the inscription of particular verses of the Quran within a star of Solomon at a time at which the planets were in a particular alignment. Perhaps it was a missed opportunity on the part of the Ashmolean not to have stocked such an amulet in the gift shop- I’m sure many of us would have taken the opportunity to marshal the supernatural in support of our theses.

For a student of Byzantine material culture, in which figural imagery plays a central role in extra-ecclesiastical or ‘magical’ ritual, the ubiquitous emphasis on text in the Islamic context was striking. However, many of the practices explored by the exhibition intimately involved the human body and so the handling session revealed many of the more tactile, sensory and phenomenal properties of the artefacts. In the case of a large bronze medicine bowl covered in calligraphic verses, the smooth feel of the low relief of the epigraphy, worn by repeated use, provided a palpably somatic connection to the magic inherent in the text. Under museum lighting, the symbols and text inscribed onto a gemstone appeared stable and permanent. In the hand this permanence quickly evaporated, as the inscriptions were completely invisible until caught by a particular angle of oblique light. The evident inseparability of text from object made me reconsider my interpretations of many of the artefacts I had seen in the exhibition context, and I think clearly demonstrated the value of physical interaction as museum practice.

I’m sure we’d all like to extend our thanks to Dr Francesca Leoni, whose expert guidance was invaluable in enriching our understanding how the artefacts were created and used.