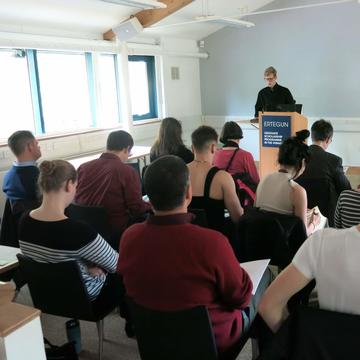 If the sign of conference success is a rich exchange of ideas—a co-written epigram may set its high-water mark. I found myself developing the one above in an exchange with Gerard Koskovich, our keynote speaker for ‘Histories of Queer Cosmopolitanism.’

The conference, which took place on May 19 at Ertegun House, interrogated how the cases, methods, and archives of cosmopolitan networks—the systems made by writers and translators, activists and martyrs across political and geographical borders—shift when studied through the prism of LGBTQ+ identity. In what ways, we asked, has queerness hindered, aided, or altered the formation of cosmopolitan networks? What are the differences between cosmopolitan networks, normative globalisms, and what Jack Halberstam has defined as ‘queer counterpublics’? In ‘Four Cosmopolitan Moments,’ Robert Fine and Robert Cohen give a trans-historical account of cosmopolitanism, citing four critical moments: ancient Greece, the Enlightenment, post-World War Two, and post-Cold War. How have the strategies, discourses, and outcomes of queer cosmopolitanism shifted in across history?

Gerard’s keynote on ‘American Queer History and the Transnational Search for a Shared Past’ studied the emergence of LGBTQ history as a cultural practice in the United States from the 1880s to the early 1960s, focusing on the inspiration Americans had drawn from European sexological texts and opening a discussion on how European homophile organisations came, reciprocally, to partner with their American counterparts. It served as the focal point for full day of rich and remarkably diverse papers, given by representatives from the faculties of Law, History, English, French, History of Design, Physics, and Global Health and Development—as well as public historians, activists, and archivists.

Our three panels discussed Queer Geographies, Queer Collections, and Queer Tastes. We began with Joanne Brueton’s deconstruction-inflected reading of Moroccan writer Abdellah Taïa’s engagement with French literary history and ended with Philip Schofield’s account of how Jeremy Bentham’s utilitarian principles had led him to develop his avant-garde positions on sexual morality. At times, ‘queer cosmopolitanism’ was found as proximate as the catalogues of the Bodleian’s Phi Collection thanks to Lloyd (Meadhbh) Houston, and in the literary and theatre magazines of Oxford’s ‘Brideshead Generation’ as discussed by Ross Brooks. At others, we found ourselves importantly disjointed in space and time, such as when Maheswar Satpathy traced the gender-queer depictions in the Ramayana through their elision in contemporary portrays of Indian LGBTQIA marginals.

We flipped back and forth across the Channel, following Teleny’s transnational geographies and musicologies thanks to Fraser Riddell. We took a trans-Atlantic turn as Hadleigh Frost wound us from the Castro through ancient paederestia and back to the Oxford of John Addington Symonds—whose half-dozen paper citations made him the day’s unofficial patron saint. We found queer cosmopolitanism in London, in interwar nightlife through John Clegg’s paper on Endell Street’s Caravan Club. We saw how it thrives there today at Bishopsgate Institute thanks to Stefan Dickers—who may soon find himself the subject of the next conference paper. For one Q&A session turned, unexpectedly, into an intervention and an appeal that Dickers make an oral history of his own contributions to the practice of queer history.

It was an appropriate tribute to one of the day’s leitmotifs. History, we saw again and again, is predicated on the resources available for it to be told, and the queer variants of those resources often need to be excavated—or created. Be it fin-de-siècle Americans looking across the Atlantic, Taïa deconstructing the French literary past or Bentham questioning our received ideas on the Greek classics—queer histories have so often required reaching across epochs and cultural contexts when locality alone cannot provide the narratives we seek.

I opened the day with a provocation and invitation on language. It was no easy task to choose the keywords for the conference title, I observed, for we are all in the business of working with terms that are unstable, often anachronistic, words that do and probably should make us uncomfortable. Symonds used the term ‘inverted sexuality,’ and in the future our vocabulary will undoubtedly look as outmoded as his own. I ended the day thinking that this instability, in language and geography, is itself inherently queer. It shows a deep commitment to the idea that today’s absolute truth will be tomorrow’s costume party—and today’s costume party might just be tomorrow’s absolute truth.

We are immensely grateful for the support of TORCH and the Ertegun Scholarship Programme in the Humanities. ‘Histories of Queer Cosmopolitanism’ would never have been possible without them.