A guided tour of Oxford

I experienced them at the present moment and at the same time in the context of a distant moment, so that the past was made to encroach upon the present and I was made to doubt whether I was in the one or the other. 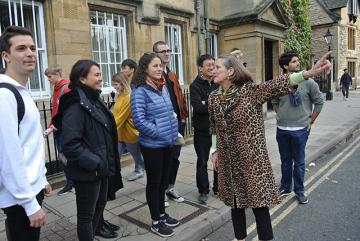 Having just arrived at Oxford I am living, for a time, bereft of these Proustian doubled-moments. It is an experience most famously theorized in the novel’s madeleine scene, in which the narrator dips his lemon-scented, shell-shaped sponge cake in a cup of tea. Upon tasting, he finds himself flooded with the involuntary memories of parallel tastes from his youth. The sensation is one of ecstasy, as he colludes present and past, indeed rises outside of time itself.

No such luck for the newest Ertegun Scholars. By definition, Oxford’s sensorial stimuli—flapjacks for the tongue, Gothic spires for the eye—cannot awaken past memories. For those memories have not been made. The first time we walk into the Ertegun House, we do so only in the present, no mnemonic layers painted on its edifice. In a way, this is a liberating experience. The past’s mental baggage suddenly vanishes, giving a straight-shot to what Edmund Husserl called epoché: removing our various filtering prisms to see the world as it really is.

Now call me a Proustian, but I’ve always found primordial perception rather unnerving. Home, for me, is constructed through multiple, interlocking temporalities, by the embodied sense that my present self is linked with its past and future versions. And this coherence depends on a physical geography well-planted with memories, little madeleines waiting to be stumbled upon as I walk through my day. When it comes to personal memories, planting those seeds simply takes time. There’s only so much one can do to accelerate the cultivation of meaningful relationships and experiences.

But there’s a second type of memory that can be more actively layered onto the present: the collective - the historical tales and literary myths that have accumulated at Oxford since its 1167 founding. I know that date thanks to a recent Ertegun foray into active memory-building: an Oxford Tour on Sunday October 7th. For two brilliant hours, we ambled down Oxford streets, sewing those mnemonic kernels, practicing the art of letting the past encroach on the present.

Here are a few:

-In St. Johns College, we return to the English Civil War. Charles I had set up his court in Oxford and promptly began raiding the University for vendible objects and smeltable metals. He demanded a book from the Bodleian, presumably for such a purpose, and they promptly rejected his request. From now on, when the bell rings at the library’s close and I begrudgingly return my tomes, I’ll recall that no King ever received a borrowing dispensation.

-Outside the Sheldonian Theatre, we spot a row of grotesques: J. R. R. Tolkien aside Tweedle Dee and Tweedle Dum aside…a boar? We learn it was a boar fought by a Queen’s College student, and he triumphed not with a sword but with a copy of Aristotle. Next time I take an interval stroll during a Philharmonic concert, I’ll recall the pragmatics of Poetics.

-We turn to the Weston Library and hear of its opening ceremony fiasco. A key was mis-lodged in a lock, a king and queen held captive amidst the manuscripts. That entrance was never fixed, we are told, and that main door never opened. Now, when I walk through the side entry to delve into marginalia, I’ll chuckle first at the trapped monarchs - then at how thin the line can be between commemorating a broken lock and being too lazy to fix it.

At the tour’s end we retire to the Ertegun House, and collective memories cede the place to the personal. New scholars exchange notes on our fresher’s weeks, the first inklings of our very own Proustian doubled-moments at Oxford. Tea is in order, but our madeleines are proper British cakes: thick slices of lemon alongside chocolate and carrot. I do not yet doubt whether I am in the past or present. But I begin to see how one day, quite soon, I will.