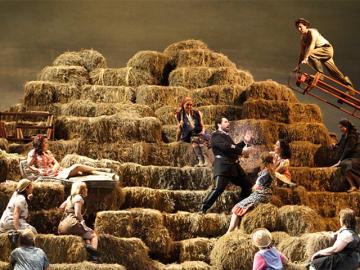 This outing constituted the last of what has been a rich and inspiring series of Ertegun trips for the 2016/7 academic year, and so was coloured with a hint of poignancy for most. Yet for scholars of whatever vintage, this excursion’s warming combination of bonhomie, discussion and cheer proved a fitting summation and closure to the Ertegun year. Those of us lucky enough travel from Oxford with our own Bryan Ward-Perkins were treated to a fleeting but flamboyant tour of some of London’s cultural and architectural curiosities: so fleeting in fact that one of our less-well-seasoned travellers nearly got lost in the underground! Reunited, and joined by those who chose to spend the afternoon in the city, we entered the magnificent Royal Opera House.

Having been warned not to expect a profound or particularly taxing plot from Donizetti's L’elisir d’amore, for many Ertegun scholars its contrast with our last opera outing to Wayne McGregor’s Woolf Works could hardly have been more stark. This light-hearted comic opera, or perhaps operetta, began as it meant to continue, with lovestruck characters tumbling down the impressively-sized haystack in pursuit of their belle, or scarcely escaping injury from the motorised vehicles. (In a subsequent performance, Nemorino did apparently sustain a serious injury from his acrobatics.) The addition of the real live Jack Russell was quite in keeping with the Royal Opera House’s farcical production. That said, musically, this production was as consummate as Donizetti could have wished. The orchestra played with verve but never drew attention from the internationally-renowned leads. The soloists were ably, and occasionally raucously, supported by the chorus of village peasant-folk, amongst whom doubtless sang some of the next generation of headliners.

Illness unfortunately plagued the performance of the 16th of July, yet can hardly be said to have detracted unduly from the audience’s experience. Our Polish scholar was initially disappointed that the famous Aleksandra Kurzak was to be replaced by understudy Jennifer Davis from the Jette Parker Young Artists Programme, but after 10 minutes all were convinced of her security in the role, the brilliance and flare she brought to the stage, and her natural interaction with all members of the cast. Over wine generously supplied by Bryan, it was commented that the ‘boy’ Nemorino (ambitiously played by the 54 year-old Roberto Alagna) was perhaps not in as fine a voice as the rest of the splendid cast. On cue, the stage manager, whose entrance before the second act was met by barely-stifled groans, abashedly announced Alagna’s ‘sore throat’ and his consequent inability to sing the second half, as well as their luck in finding a replacement at extremely short notice. The tenor, Atalla Ayan, was rumoured to have been rehearsing in the basement for his role in La traviata, also on at Covent Garden, when he received Alagna’s plea: Ayan would stand side of stage while Alagna continued to mime his role.

Far from presenting an embarrassment to be ignored, this odd situation was interpreted creatively by the performers. Nemorino, his physical presence divorced from his voice through most of the second act, was brought into a touching unity during his aria Una furtiva lagrima, as Alagna drew Ayan into a tender embrace. As Chiara Giovanni later reflected, this episode, in which thankfulness, sorrow and optimism commixed, aptly captured the sentiment of the Ertegun community, for many of whom this gathering would be our last.