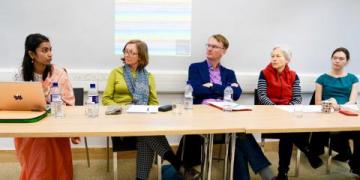 In her presentation Dead as a Dodo? Why Literature Matters in Times of Migration and Unrest, given as the Eugene Ludwig Lecture at New College on 24 February 2017, the German author Ulrike Draesner spoke about literature as a means to transport and deal with traumatic memory:  ‘Literature expresses what is beyond normal verbal expression, things that will overwhelm you and suffocate you if they are suppressed.’

The roundtable Fractured Stories? Narratives of Migration, hosted at Ertegun House the following day, was designed to discuss this topic further in an interdisciplinary context. Both students of Modern Languages, my fellow Ertegun scholar Chiara Giovanni and I share a passion for stories and the fundamental, transformative role they play for human lives. Our aim for the symposium was to explore the power of narratives in the context of migration – from the perspectives of different cultures and disciplines. Bringing together five speakers from fields as diverse as literature, history, anthropology and psychology, with research interests spanning across Europe, the Americas and Asia, the colloquium, in particular, addressed the following questions: When people move, what kinds of stories do they tell? What happens to those narratives when they circulate around the world? And: can narratives of migration ever form a coherent whole, and should they have to?

Based on the story of her own family, who had to flee Silesia after the end of World War II, Ulrike Draesner gave the symposium’s opening talk, exploring the sensation of the loss of home. This was followed by Dr Andreas Kossert’s presentation, in which the Research Fellow at the Berlin Foundation for Flight, Expulsion, Reconciliation examined the situation of post-1945 German Refugees from the East through the lens of a historian. With the next section of talks, our focus shifted from Germany to South America: Dr Katie Brown, Teaching Fellow in Hispanic Studies at the University of Bristol, explored the importance of migration narratives in shaping Venezuelan identity; and the social scientist Dr Mette Berg from University College London examined multigenerational and intercontinental stories of migration between Cuba and Spain. Finally, Geetha Reddy, a PhD candidate at the London School of Economics, offered a psychological perspective on South Asian diasporas, discussing how power relations and the Other shape narratives of migration. These fascinating and insightful presentations were followed by a podium discussion in the afternoon, which brought together the speakers’ different angles in an interdisciplinary conversation. The way in which this exchange intertwined various disciplines discussing home, belonging and the fractured nature and aesthetic of narratives of migration with regard to different cultural contexts surpassed our best hopes and expectations. Numerous positive responses from the audience emphasised the stimulating effect of this interdisciplinary and intercultural day, exploring one of the most important issues of our time.

This would not have been possible without the generous support of Ertegun House. We are deeply grateful for the Programme’s resources and funding, which permitted us to host a wonderful symposium that was free and open to all – students and lecturers from different subjects and universities as well as, very importantly, people who are not affiliated with an academic institution. Ertegun House Director Rhodri Lewis and Administrator Jill Walker greatly supported us throughout the organisation of the event.

The way in which the Ertegun Graduate Scholarship Programme recognises the value of the humanities and fosters interdisciplinary and intercultural exchange is unrivalled in the world and allows us to put together events like this at a very early stage of our academic career – a unique opportunity, for which we are immensely thankful.