A tour of Keble College 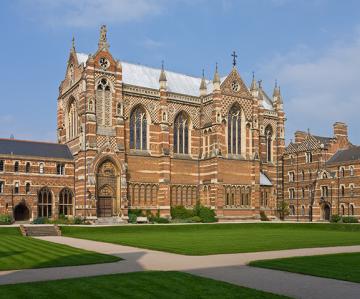 As part of the tours organised by Ertegun House, a group of scholars visited a rather uncharacteristic example of an Oxford college: Keble College. Our able guide, Professor William Whyte told us that when it was established in the 1870s, the college’s unusual appearance and ideological roots generated a great deal of animosity, not least from the students of its neighbour, St John’s, who were quick to start a “Destroy Keble Society,” the goal of which was to dismantle the college–literally brick by brick.

Keble is a classic example of the nineteenth-century’s Gothic Revival, and perhaps not unsurprisingly, resembles roughly contemporary buildings in colonial India, most obviously the Victorian Terminus railway station in Mumbai. Its architect, William Butterfield, was associated with the Anglo-Catholic Oxford movement, and so hoped that the building’s aesthetic form would not only be beautiful, but also honest and open, without unnecessary ornamentation and deception. Keble’s classic red-brick façade embodies this cleanness of design, while also ensuring that it stood out in stark contrast to the predominantly stone-work buildings of the rest of the university.

Butterfield’s use of brick also reflected the kind of student body to which Keble catered, and whom it hoped to shape. Unlike the aristocratic manners that the older colleges sought to cultivate, Keble strove to provide its students with an affordable education, emphasising the value of community and religion. These ideals influenced the perceived role of not only the stunning chapel (which is done in gold and coloured mosaic, and contains a copy of Holman Hunt’s famous Pre-Raphaelite painting, The Light of the World), but also the dining hall, where the students had to eat compulsorily.

The newer, twentieth-century parts of the college deserve some mention too, particularly the fact that these buildings challenge yet another Oxford tradition: they are organised around corridors rather than staircases. The Ertegun scholars were also delighted to find Keble’s inclusive, hospitable spirit continuing into the present, when they were given chocolate coffee tarts to eat on their way out.