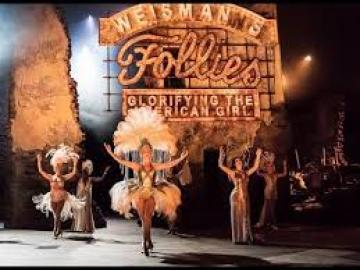 There are few things more dissonant than reading Friedrich Nietzsche en route to a Stephen Sondheim musical. I had, as one does, found myself separated from the rest of the Ertegun crew on the train from Oxford to London, so I settled down with the first of Nietzsche’s Untimely Meditations. The piece is framed as a caustic response to an essay by David Strauss, but Strauss is in truth a mere scapegoat for Nietzsche’s censure against cultural philistines. It was at once apparent that my taste in musical theatre slotted me into that group. Philistines, for Nietzsche, are ‘omnisatisfied’ i.e. fully content with the cultural offerings available; prefer modern over classical language; and ‘want to know of an artist only that by which he is suited for their domestic service, and can see no alternative but using him as perfume or burning him.’

An hour later, I was seated at Follies: Sondheim’s 1971 take on a reunion of aging Broadway beauties and beaus. Each character is double cast, so the middle-aged leads are shadowed by their youthful ingénue selves. They’ve come together for one last night at a now-derelict theatre to face their follies. We hear them wax on lives lived and loves lost, spout clichés on how New York has changed, and confront the fact that a six-minute belted tap-number is no easy task when you’re nearing 60. In Nietzsche’s terms, yes, this is art as ‘domestic service,’ art as ‘perfume’ applied via ensemble dance numbers and feather-adorned costumes.

Perfume even makes a literal appearance. 66-year-old coquette ‘Solange La Fitte’ markets her personal scent, before launching into her francophilic ballad ‘Ah, Paris!’ The song lists various cities inferior to the French capital, featuring lines like—‘Beirut has sunshine; that’s all it has’ and ‘Constantinople has Turkish Baths and Athens has lovely debris.’ Considering Ertegun scholar Ursula had just given our weekly seminar on Flavius Josephus and the Greeks, such lines on the ancient world certainly felt like the epitome of cultural philistinism.

Yet the perfume was sublime. The singers calibrated their vocal power, allowing the energy to carefully crescendo throughout the night; the band brought out the big brasses at just the right moment; and Sondheim’s talent for the quip was in full power. For every line in ‘Ah, Paris!’ on Athens debris there was one by Phyllis in ‘Could I Leave You’ ironically scatting on the non-difficulty of departing her passionless marriage: ‘Could I live through the pain on a terrace in Spain? Would it pass? It would pass.’ It is at these moments—when characters delve deep into their past follies, then strike out a new, strident course, that a line from Martin Gottfried’s review struck home: ‘Follies is truly awesome and, if it is not consistently good, it is always great.’ By the show’s end, I felt quite content leaning into my inner cultural philistine and embracing the ‘awesome.’

Then something odd happened. The next morning, I paused the Follies soundtrack I had kept on loop from the night before and returned to the second Untimely Meditation: ‘On the Uses and Disadvantages of History for Life.’ In this essay, Nietzsche adopts a new punching bag: overly-historical living. By his account, this mode of being leaves us trapped in past narratives and memories, preventing us from seizing the vital present. ‘Forgetting is essential to action of any kind,’ Nietzsche writes, ‘just as not only light but darkness too is essential for the life of everything organic.’ Two options exist: the ‘ahistorical’ stance, likened to that of a cow, in which all is forgotten from the onset, or the ‘suprahistorical’—which surveys past moments in order to relativize the present, seeing ‘no salvation in the process and for whom rather, the world is complete and reaches its finality at each and every moment.’

The lesson of Follies is not dissimilar. Past lives haunt Sondheim’s characters so intensely that they become a set of corporeal presences on stage. In watching that shadow cast, we realise these characters kept waiting for the future, for a moment of personal becoming—and then suddenly they found themselves looking back. Anticipation became nostalgia with no discernible ‘now’ in between. In their own ways, Nietzsche and Sondheim both recommend genealogy, be it personal or cultural, as a means rather than an end: a way to recognize that the present and its constant finality is all we ever have. There was consonance, I realized, not dissonance, between the philistine perfume and its critic. Follies felt like a rather timely meditation.