Faith after the Pharoahs 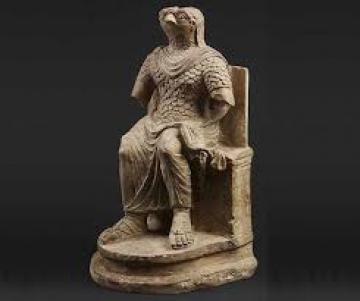 On Saturday a delegation from Ertegun house set off for ‘faith after the pharaohs’ at the British Museum. I was particularly keen as the artefact whose image has been splashed over leaflets, posters and catalogues for the exhibition is probably my favourite in the BM’s collection- a large chunk of green Egyptian basalt carved into an idealised portrait of the young Julio-Claudian prince Germanicus in the early first century AD. Germanicus can usually be found amongst ranks of other similar portrait busts in the Roman art gallery, where his presence has always seemed to me to highlight one of most awkward aspects of experiencing archaeology through museums. This is because at some point in late antiquity a cross was carved on Germanicus’ forehead, and probably at another moment in time his nose was subjected to two massive chisel blows in an act of deliberate mutilation.

Buildings like the BM contain the accumulated remains of multiple different pasts, and tend to categorise and display the artefacts they acquire by the date and location of their creation. Discrete rooms are filled with Roman sculptures, monuments of Pharaonic Egypt, medieval Christian icons etc., and you have to leave the hieroglyphs behind if you want to go see some Byzantine silverware. This is awkward because that’s not really how material culture works. It can be all too easy to conceive of the archaeology of a certain period as the study of the art and artefacts created within that period, as opposed to the study of all existing material culture at a certain time, including that which may have been created centuries previously. Artefacts are created, undergo modification, are re-used and reinterpreted until finally we are confronted by a complex archaeological palimpsest. The mutilated Germanicus in the Roman art gallery made obvious the ways in which traditional museum displays stifled this dialogue between the centuries. I was excited to see in what context he would find himself in the exhibition.

We found Germanicus alongside a fantastic range of artefacts and photographs illustrating Egypt’s rich archaeological record. The late antique grave stele whose reverse was covered in already ancient and mysterious hieroglyphs. The Christian incense censer whose openings were shaped to resemble the masks of pagan classical theatre. A medieval Arabic book with depictions and commentary on Pharaonic scripts. I particularly enjoyed the prominently displayed photographs of the mosque still standing amongst the ruins of Luxor- a striking reminder of the vandalism inflicted by nineteenth century classicists on the Athenian Parthenon. In this setting Germanicus and his wounds could finally make some sense. The exhibition managed to explore the messy longevity of archaeological artefacts without sacrificing thematic coherence, a remarkable achievement. It was a great trip made memorable by the enthusiasm of the Ertegun team, with special thanks being definitely due to Bryan for his incisive and expert commentary on all things late antique.